​Built circa 1702 by Lord of the Manor Sir William Pritchard and endowed with a £10 a year charitable legacy to employ, “an honest person to teach reading.” Great Linford’s original school house remains to this day a striking central feature of the Alms House complex in the manor grounds; Sir Frank Markham in his “History of Milton Keynes” described it as, “a fine schoolroom and schoolmaster’s house with attractive panelling.” Alongside the £10 a year provided to employ a schoolmaster, Markham also states that parents later paid 1d a week for the provision of firewood.

£10 seems to have been the basic lower end rate for a teacher; Michael Reed in his “A History of Buckinghamshire” alludes to a range of salary between £10 and £26 for schools founded in the county during the 16th and 17th centuries, room and board included. Markham notes that a charity school in Wavendon was particularly flush, and could afford to pay it’s teacher £40 a year in 1713. It was also not uncommon for teachers to be allowed to take in paying borders to supplement their income, but though the Pritchard fund was paying out at the low end of the scale, there is no evidence to suggest this occurred at Great Linford. An early indication of the number of pupils can be found in a book published in 1717 called, “Methods used for erecting charity schools”, which contains a list of schools throughout the country and the information that twenty boys were taught at Great Linford.

What if anything might have been taught in these early days other than “reading” is a matter of conjecture and may have very much depended on the nature and ambition of the schoolmasters employed. The prevailing curriculum of the time for the better class of schools included writing as well as Latin and the “casting of accounts.” The latter does not have an entirely clear definition, but to describe it as an attainment of basic numeracy would not be far off the mark; essentially then, what would come to be described as the 3 Rs.

A “Commissioners report into Charities” published in 1841 and summarising information gathered in 1833 labels Pritchard’s school’s as “not classical”, and its goal to educate, “as many poor children as trustees should nominate, to be taught reading English.” This emphasis on reading appears then to have endured throughout much of the school’s life, as did the £10 per year funding from Pritchard’s charity, so it seems possible that very little changed from its founding in 1702 until it was absorbed under the banner of the National School system established by the Church of England. Volume 21 of the “Schools Inquiry Commission” published in 1869 indicates the income of Pritchard’s School was still then £10 and that 20 boys were enrolled, with the parents paying between 1 and 2d a week. Interestingly, the parents are described as, “labourers and railway workmen.”

Identifying the name of any school master prior to the first full census of 1841 is a vexing problem, but we do have one early record pertaining to the school. At the Easter Quarter Session of April 16th, 1713, we find that a Thomas Hinton of Newton Longville, yeoman and “Inspector of the poor” was asked to show cause why he refused to grant a certificate to Thomas Barton, schoolmaster of Great Linford. What the certificate was and why it was refused requires further research, but there was a Thomas Burton married to an Elizabeth Spencer on November 18th 1716 at Great Linford, who may conceivably be the same person. He may have been in fact the very first schoolmaster.

The first schoolmaster we can trace with confidence is a local man named Benjamin Pavyer (a surname subject to endless vagaries of spelling such as Pavior, Pavyor and Paviour), who was christened March 31st 1773 at Great Linford, the son of a Thomas and Ann. Benjamin married a Mary Blunt at Ashton in Northamptonshire on December 10th 1801 (the marriage records Benjamin as a resident of Great Linford) and they had at least 3 children together including a Mary who is quite likely the 35 year old female living with Benjamin in 1841 at the School House.

Unfortunately, Benjamin was widowed sometime before or during 1811, as on October 8th that year, we find him remarrying at Great Linford to an Elizabeth Knight. They had at least two children, though given that she is not with him in 1841, it seems likely that Benjamin was sadly twice widowed. We know that Benjamin was still the schoolmaster in 1847 as he is listed as such in the Pigot’s Trade Directory for that year, but unfortunately little else can presently be found about him, though we get a hint at his standing in the community from a lease dated 1818. In this document, he is named along with a Luke Alibone as, “yeoman, churchwardens and overseers”, pertaining to a, “small piece of land in Great Linford on which 4 cottages have been erected by the churchwardens and overseers of Great Linford adjoining the common street on the west. (D-U/1/117) A Benjamin Paviour was buried at Great Linford toward the end of 1847.

A new school master is incumbent at the school by the time of the 1851 census. William Burn was born 1789 in the parish of Kingston, Hampshire and at the time of the census was 62 years old. The earliest reference that can be found for him is a newspaper announcement in the Northampton Mercury of Saturday 11 July 1818, which reveals that he was the headmaster of The Newport Pagnell Academy. This would be a private fee-paying school, probably run from his home. The advert is highly revealing, and while it is fairly certain that nothing like the same curriculum was followed at Great Linford, which one suspects must have been something of a step backward for William, it is worth reproducing here. 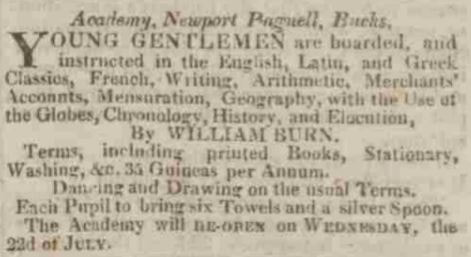 Northampton Mercury - Saturday 12 January 1822, page 1. Reproduced with permission of THE BRITISH LIBRARY BOARD
Bringing some towels seems a reasonable request, but why it would be a requirement to also bring a silver spoon is something of a mystery, though it was by no means an uncommon request, as other schools of the time set the same stipulation. The saying, “born with a silver spoon in their mouth” has no firmly acknowledged origin, so could this be where the phrase originated?

In 1822 William was charging students 35 guineas per year, though perhaps he had set his aspirations a little high, as just a year later he had dropped his fees to 25 guineas per annum, still though a reasonable amount of money for the time. William continued to advertise sporadically until at least 1843, though his subsequent announcements appear to have been limited to term opening dates. But then in January of 1847 we find William in hot water, for here are published several ominous newspaper notices from an accountant at the Newport Pagnell Savings Bank, asking that creditors and debtors to William Burn, Schoolmaster, make themselves known. It seems likely that William had gone bankrupt and indeed no further references to himself in Newport Pagnell, nor his Academy, are evident. Could this then have been how in 1851 we come to find him the schoolmaster of a small rural village in likely much reduced circumstances; remember the charity Pritchard had established paid out only £10 per year for the employment of a teacher.

However, there is a hint that the original Pritchard charity was no longer the sole source of income to the schoolmaster. In 1854, William’s daughter Elizabeth married a George Goff of the Newport Pagnell canal wharf, and in the newspaper announcement, William is described as the headmaster of a “National School”. This meant the Church of England was now involved in the running of the Alms House School House.

The 1854 Trade Directory published by Musson & Craven provides an additional detail, stating that the school accommodates about 40 boys, double the number when it was founded. William was still the school master at Great Linford by the time of the 1861 census, and joining him and his wife Ann was a lodger William G Wilson and 13 year old George Wilson.  George would subsequently publish a short memoir, which confirms that William Burn was his grandfather. George was a student from the age of 7, leaving Great Linford when he was between 15 and 16. His memoir provides a fascinating detail of the education offered, though it is not a flattering one. "I may say at once that the only thing I was conscious of learning while I was there was to say the whole of the Latin grammar by heart like a parrot, without the least idea of what it meant."

William was still listed in the 1869 Kelly’s Trade Directory as the Schoolmaster, but was to depart at some point before 1871, as the census that year has him retired to the London household of his son William Wilson Burn, a manager of Praed’s Bank on Fleet Street. By this time, his grandson George Wilson whom we found at Great Linford in 1861 has become a student of medicine, and by 1901 had established himself as a surgeon in Brixton, so it seems that despite the manifest deficiency of his Latin lessions, his grandfather had instilled in him an instinct for learning; George’s obituary states he was also fluent in the artificial language Esperanto.

William Burn died at the Fleet Street home of his son on February 10th, 1872, aged 84. The notice of his death in the Bucks Advertiser & Aylesbury News of Saturday February 24th, 1872 makes reference to his residency at Great Linford and Newport Pagnell, but unfortunately offers no biography on his life. He was however quite likely one of the last persons to have undertaken teaching within the walls of the Alms House school.

There were two “school mistresses” in the village in 1871, recorded on the census as Mezilla Wilson and Annie Mapley. Born in Banbury, Oxforshire, 24-year-old Mezilla was living at the “school house”, which must surely have been the Alms House building, alongside a younger sister and brother, both of whom were listed as scholars. Annie was born in Great Linford and 26 years old at the time of the census, the husband of an agricultural labourer named Charles. They lived on the High Street. Occupying the school house would seem to make Mezilla the senior of the two, presuming both were working together in Great Linford. It is interesting that finally the monopoly enjoyed by men in the teaching profession at Great Linford had been broken.

Final years and legacy
​
One would presume that the schoolhouse located at the Alms Houses became effectively redundant as a place of learning with the opening in 1875 of the Church of England St Andrew’s school on the High Street, though the old school house continued to serve as a home for village headmasters for some time afterwards, possibly until the 1950s. There are references in Trade Journals for 1877, 1883 and 1887 to indicate that Pritchard’s charitable legacy of £10 per year was still being paid out for the purposes of reading and education, while a newspaper report in 1907 indicates the income had increased to £20, providing for, “the letting of the teacher’s dwelling house, for the maintenance and improvement of the Great Linford Church School Buildings, and for the disposal of any residue of income in exhibitions, bursaries and prizes.” This would seem to indicate that Pritchard’s charity was now paying toward the upkeep of staff and facilities at St Andrew’s School, but for an intriguing advertisement placed by the Church Wardens of Great Linford in the Northampton Mercury of Friday September 15th, 1911. This calls for applications to the vacancy of School Master of the Church of England, to take care of the Charity School at a salary of £10 per annum, with a good and convenient house, rent free, with seven pounds allowed for the Sunday School. But St Andrew’s already had a school master of good standing, who did not leave his post until the 1920s, so does this advert imply that a “charity school” was still operating in parallel at Great Linford as late as 1911, and if so, where? This is a mystery yet to be solved. ​