​The village of Great Linford sits some 90 meters above sea level overlooking the River Ouzel valley to the east, though the sweeping scenic views that would have delighted visitors to the manor gardens several hundred years ago are now long obscured, with the treeline sprouting along the Grand Junction Canal (1800) and the subsequent Newport Pagnell Railway line (1864) having radically altered the landscape.

Dig down and the geologist will find an outcrop of middle Jurassic Blisworth Limestone located principally around the church and the manor garden, atop Jurassic era Oxford clay and boulder clay laid down by glaciers. This geology feeds natural spring water into the cascading ponds of the manor park. North of the church, we find the remains of the quarry that once supplied limestone building material. This particular quarry may have entered operations in the mid-1860s, but given the clear usage of limestone in various older buildings and walls in the parish, including the manor house, it is certain that other quarries must have been in operation long before this.

How old is Great Linford?

Worked flint has been found ranging in age from the Mesolithic to the Bronze age and a small number of pottery finds and a coin discovered within the village hint at the possibility of a Roman presence, but no evidence of Roman habitation has ever been discovered. It seems likely then that the earliest settlement was established in Saxon times. Evidence for this was unearthed during Archaeological investigations within St. Andrew's church in 1980, with sherds of Saxon pottery dated to the seventh to eighth centuries were found in substantial volume in a ploughshare layer, as was evidence of a late Saxon or early Norman chapel.

Prior to the development of Milton Keynes, the land in the parish was largely pasture, but almost all had been ploughed in the medieval period. The ridge and furrow field system was mapped in 1972 before it was obliterated by development, and though the date that the fields were established is uncertain, if we consider that a sixth or seventh century Saxon settlement was discovered beneath similar ridge and furrow fields in adjacent Pennylands and that Great Linford is mentioned in the 1086 Domesday Book, then this would seem to provide a likely window of time for its establishment. Writing in their extensive account of the archaeological digs conducted at Great Linford between 1974-80, Mynard and Zeepvat postulate that the field system was established in the tenth or eleventh century, and the village at much the same time.

To the south of the high street is the old village green, once the site of extensive medieval earthworks located on its south and east sides, but since erased by modern development. The Green was once much bigger than the triangular rump that remains today, and was the site of a number of crofts. Why the Green should have fallen out of use is presently unknown.

Earthworks were also to be found elsewhere in the vicinity of the village, including to the east of the High Street and within the present manor park grounds, adjacent to and running through the Rectory garden wall toward the house. Like those around The Green, all trace of these have now sadly vanished.

The origin of the name Great Linford

The origin of the name Great Linford is a matter of speculation, but it may be that it was derived from a ford over a river (the Ouse?) near a Linden tree, otherwise known as a Lime tree.  Similarly, the old English word for a Maple tree is hlin or hyln, so this too may point to an origin for the name Linford. Equally, suggestions have been made that it may be derived from another old English word, lin, for flax, linen or cloth. Given that the manufacture of linen cloth requires a good supply of water, and we know Great Linford was well served by springs and once by a stream running through the manor grounds, this theory may also be worth considering. Great Linford boasts one particularly spectacular Lime tree within the manor park grounds, though not nearly old enough (possibly 300-400 years) to have any connection to the village name.

Great Linford was the first village incorporated into the new city of Milton Keynes after it was conceptualised in 1967, but though the area has since been substantially built up with modern housing and amenities, the historic core of the old village with its High Street and Manor Park has retained some of its old flavour and character. Much has however changed, with all of the single story thatched dwellings that lined the High Street either heavily modified or demolished over time, notably during a period of slum clearance in the early 1930s. 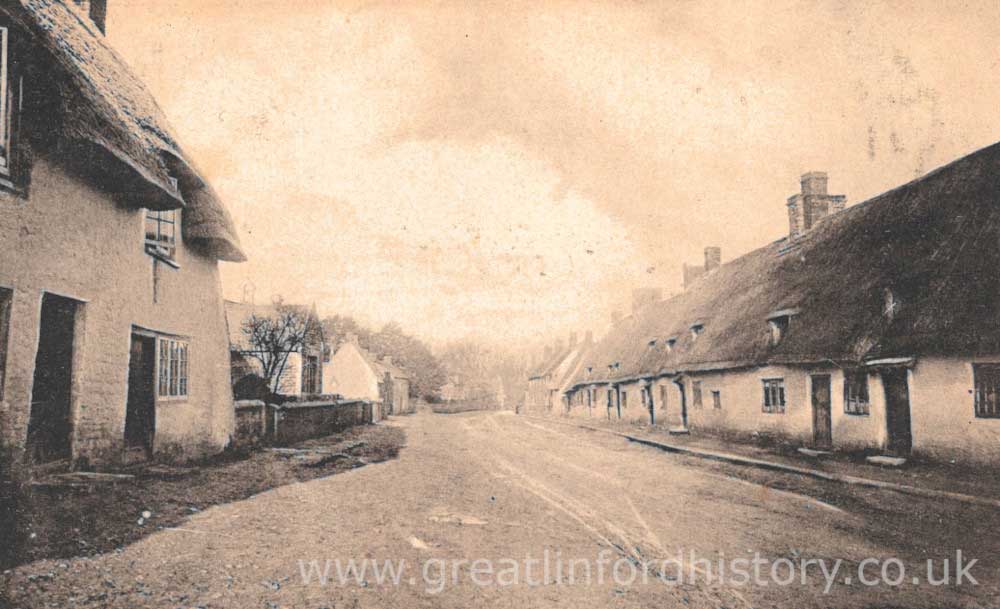 Great Linford High Street looking toward the Manor Park grounds before many houses were demolished in the 1930s.
Additionally, the village High Street that can be seen today once had a number of “yards” on both sides, containing additional dwellings and perhaps some light industry. Bird’s Yard, Chapel Yard and Pinney’s Yard are long gone, but Rivett’s Yard, situated between number 27 and the stone built house known as The Salt Box, survives still as a private drive. Resident village photographer Harry Bartholomew (1862-1934) had his dark room in Rivett’s Yard, and is said to have dried his photographic plates there in the sun.

The village High Street was once a quite industrious place, with many trades represented. Alongside Harry Bartholomew’s photography business, there was at one time or another a general store and post office, a butchers, a bakers and a blacksmith’s forge. The pub in the High Street now known as The Nag’s Head has long served the village and is certainly very old, having gone through a number of name changes; it was the White Horse in the 1750s and the Six Bells in the 1760s, the latter name undoubtedly a result of the recasting of the 5 church bells in 1756 and the addition of a new sixth bell. Several other public houses were established in the parish along the route of the Grand Junction Canal, though of these only The Black Horse continues to trade, the Wharf Inn having closed and been converted to a private residence. Pubs were more than a place to drink, and were frequently used for sales, and places for coroner's juries to convene.
​
Add to this the once ubiquitous cottage industry of lace making (which once included a lace making school on the High Street), the farms that surrounded the village, a stone quarry, several brick works, a busy wharf and a healthy trade in timber (there was a saw-pit by the church), and the idea that Great Linford might have been a bucolic little hamlet of no real consequence can be conclusively dispelled. There was even a windmill in the parish, which was likely constructed of the order of William le Waleys around 1285 when he acquired a house and lands. It went out of use sometime in the 15th century, though it seems entirely plausible that it was memorialised in its namesake Windmill Farm, an element of which still survives in the form of a barn conversion on the High Street.

Great Linford Manor Park, with its cascading ponds, Doric Seat, Ha Ha and Wilderness is an example of the English landscape garden design movement, which replaced the previous highly formal garden style popular in England with one that attempted to create an idealised pastoral view of the countryside.  Prior to the establishment of pleasure gardens at Great Linford, which probably began in the late 1600s or early 1700s, the village High Street extended down toward the circular pond in the grounds, which is fed by the Hine spring, an old English word for serf or peasant.

Set in the grounds of the manor are the impressive Almshouses, built by the Lord of the Manor Sir William Prichard circa 1700 for the poor of the village, but which also incorporates in their centre a school house, endowed by Prichard with £10 a year to pay for a teacher. It would continue to educate the children of Great Linford (boys only) until 1874 until St. Andrew’s School was opened on the High Street. After the passing of Sir William, the manor was inherited by his nephew Richard Uthwatt. The Uthwatts would hold the manor for over 200 years across a dozen generations and continue to alter the landscape, overseeing the inclusion of the cascading ponds.

The church of St. Andrews is the most visible manifestation of religious observance in Great Linford, a structure that contains elements dating back to medieval times, but which also stands atop an earlier chapel, believed to be either late Saxon or early Norman in date. But there have been other religious movements in the village, with dissenters a thorn in the side of the established church for many centuries, a  movement that became sufficiently large in numbers to build the Congregational Chapel that still stands today in the High Street. This was constructed in 1833, to some resistance from the established church.