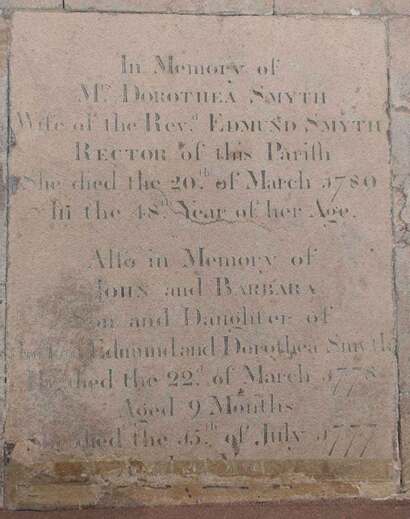 Memorial on floor of St. Andrew's Church to Dorothea Smyth, nee Shan and two of her children,
​The connection of the Shan (also spelt Shann) family to Great Linford, and the various relationships by marriage to other notable residents in the history of the village is an interesting one, but to begin with the Reverend Lawson Shan, he was born in 1734, the son of John Shan and Barbara Remington of Chicheley in Buckinghamshire. John Shan was the Vicar of Chicheley, as well as the Rector of Farndish in northwest Bedfordshire, so it is hardly surprising that his son followed in his footsteps.

Lawson was educated at Saint John’s College in Cambridge and was ordained a Deacon by the bishop of Lincoln on December 15th, 1757, becoming briefly curate of Little Wolston in Buckinghamshire; intriguing to observe he shared this connection with his predecessor Robert Chapman and may even have been appointed by him. He was subsequently ordained as a priest on December 24th, 1758 and licensed to the curacy of Great Linford on August 14th, 1762. He was then appointed rector of Great Linford and remained in the post until his death on January 22nd, 1770.

Shan’s appointment was not however quite plain sailing. In the book, “Admissions to the college of St John The Evangelist in the University of Cambridge” edited by Robert Forsyth Scott and published in 1903, we find reference to the following note held at the British Library and attributed to the collection of the antiquarian William Cole.

Robert Chapman, Rector of Great Wolston, was presented [i.e. to Great Linford] by Henry Uthwat, esq., on Mr Barton's death in 1755, to hold it in trust for Mr Lawson Shan, then a minor at St John's College, Cambridge, and second son to Mr John Shan, Vicar of Chicheley. By reason of a doubt in relation to the right of patronage between Mr Andrews of Buckingham, guardian to his son, who is in the Entail of the Estate after Mr Henry Uthwat's widow, and the said Mrs Uthwat, who has the estate for life by the will of her late husband, and so claims the patronage for her time; whence Mr Andrews has put in a caveat against her Presentation. The Bishop has refused to accept of Mr Chapman's resignation, which has been offered, but I was told by Dr Forester this week that the Bishop upon being informed of the state of the case designs to accept forthwith of Mrs Uthwat's presentation of Mr Shan. Feb. 23, 1760, W. C.

So here then we have a dispute between the widowed Frances Uthwatt, then living at Great Linford Manor under the terms of her late husband Henry’s will, and the heir apparent to the manor, Henry Uthwatt Andrewes. The dispute was connected to the Advowson, the legal right to appoint the rector of Great Linford, and who in the eyes of the law and church was the wielder of that power. We see that 2 years before his death in 1757, Henry Uthwatt last used this power to appoint Robert Chapman on a temporary basis, whereafter the uncertainty as to where the right resided arose. Adding spice to the story, it is thought that Francis and Lawson became romantically involved and were planning to marry, but for the untimely death of Lawson at the age of 36 in 1770.

Though not mentioned in the above correspondence, the aforementioned Admissions record for St John states that the advowson was then actually held on behalf of Frances by Sir Roger Newdigate and a William Boget, esq, executors of Henry Uthwatt’s will.
​
Cole’s collection also contained a letter from the Bishop of Lincoln addressed to the Reverend Robert Chapman, elaborating on the reference above to the refusal to accept his resignation.​

I have receiv'd your resignation of the Parish Church of Great Linford in the County of Bucks and in my Diocese, drawn up in due form of law and sign'd and seal'd by you and attested by two credible witnesses. By this absolute and entire resignation of your Living into my hands, you have honestly and honourably discharged the obligation of your Bond ; but your engaging to procure my acceptance of the said Resignation is illegal, as being out of your power to perform and no man can be bound to an impossibility. This is therefore to acquaint you. That I will not accept of your resignation till sufficient security be given to me for Mr Lawson Shan's succeeding to the Rectory of Great Linford upon your resignation being accepted ; for you are bound to resign only for the use of the said Lawson Shan ; and I was determined not to accept of your resignation, but for his use only ; and you must continue to hold the Rectory of Great Linford till such time and assurance be given me that you shall be succeeded in that living by the said Mr Lawson Shan. I am Sir,

P.S. You will signify to me that you have received this letter and acquainted the Persons concerned with the contents of it.

Lawson Shan passed away at the early age of 36, but was not buried at Great Linford, rather he was interred at the place of his birth, Chicheley, where on a slab in the floor of the nave was carved the following inscription.​

Under this stone lie entombed the remains of the Rev. M Lawson Shan, late Rector of Great Linford in this County. Exemplary in the discharge of every Christian Duty, greatly beloved and lamented, he finished his course in the meridian of his days, but ripe for Eternity, on Jan 22nd 1770, aged 36 years.

The family tree of Lawson Shan reveals further connections to Great Linford. Lawson’s sister Doretha, married Edmund Smyth in 1756, who succeeded Lawson as Rector of Great Linford in 1770. Meanwhile, another sister, Anna Maria, married a Benjamin Cape, a London brewer, two of whose daughters, Maria Barbara and Ann, we find occupying Glebe House on the High Street in the mid 1800s. ​