While there are not an enormous number of stories that can be attributed to the Congregational Chapel at Great Linford, and notwithstanding its primary use as a place of worship, we do have a number of interesting events that can be recounted. 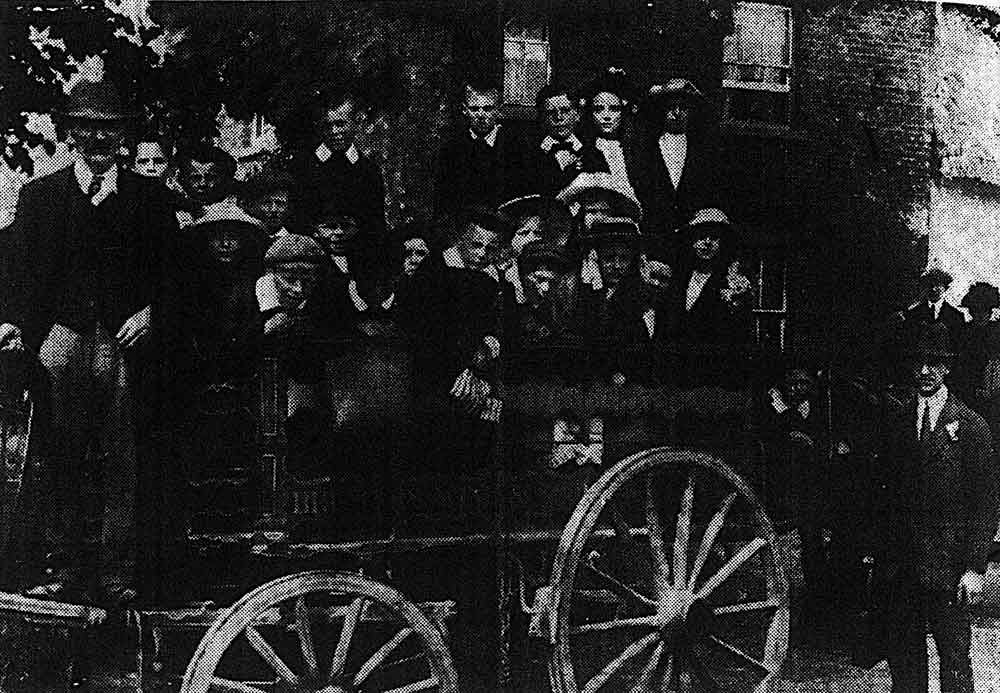 An outing for children organised by the Congregational Chapel at Great Linford.
On Saturday, July 13th, 1907, (as reported in Croydon’s Weekly Standard) the teachers and students of the Congregational Chapel Sunday School took a day trip to Bow Brickhill. 52 persons in total set out, conveyed by horses drawn carriages supplied by Mr W. B. Shakeshaft, Mr W. J. Short and Messrs Salmons and Sons of Newport Pagnell. Horses were provided by Mr Read. The weather was good except for one slight shower,  and on arrival the children had games to play and a tea, which was much enjoyed by all. Interestingly, the Sunday School had its own superintendent, identified in the article as Mr Thomas Jones, who we know from the 1911 census was a Canal Repairman, and lived that year at Canal Cottage. A Mrs Read and a Miss Austin are also identified as officers of the Chapel. The picture reproduced above (taken by local photographer Harry Bartholomew) is attributed to an outing in 1912, but it is entirely likely that some of the persons mentioned above are pictured.

The Chapel was a place not just for worship, but other activities such as putting on entertainments and providing a venue for good causes. The temperance movement, dedicated to ridding the country of alcohol, used the Chapel on several occasions to promote its message of abstinence.

One such meeting that attempted to drum up interest in more ways than one took place at the Independent Chapel on April 15th, 1875, in which a number of doubtless impassioned speeches were given and a juvenile drum and fife band marched and played through the village. The meeting was held under the banner of the North Bucks Degree Temple and the I.O.G.T (International Organisation of Good Templars.) The I.O.G.T were an organisation somewhat similar in their regalia and ritual to the Freemasons, but aligned closely with the temperance movement. Alas the meeting had been called at short notice, which was blamed for the poor turn-out, but perhaps not even the drum and fife band could lure the dedicated drinkers from the Nags Head.

Another event took place on the Good Friday of 1880; described as a musically illustrated reading, with songs by the choir of the Newport Pagnell Independent Chapel. The Reverend J. A. Balshaw occupied the chair and gave the readings to the large audience in attendance, with Mr Thomas Chapman providing musical accompaniment on the Harmonium. The same afternoon, members of the Band Of Hope, which was a nationally organised movement to teach children the perils of drink and the benefits of sobriety, spent a pleasant time playing games in a meadow, before more than a hundred persons retired to the Chapel to take tea. The Band of Hope convened in the Chapel the following Monday, for an evening of song, recitation and speeches extolling the virtues of tee-totalism.

​While meetings on biblical matters were of course not unusual, occasionally we find something a little odder, such as a lecture held on January 23rd, 1867, which took for it’s subject matter popular superstitions amongst the uneducated masses. Areas touched upon by the speaker Mr. Joseph Simpson included witchcraft, magic, fortune-telling, omens, dreams and apparitions. The lecture attracted a large and appreciative audience, so many that they could not all be accommodated and some were forced to stand for the entirety of the evening.