Stella Uthwatt was born June 4th, 1910, likely at the property on the High Street now known as Glebe House. Her father was Gerard Thomas Andrewes Chapman Uthwatt, whose brother William Francis Edolph Andrewes Uthwatt had inherited the Great Linford estate in 1885. Gerard had missed out on inheriting the estate himself as William had a son, but appears to have prospered and resided in the village all his life. Going by his frequent appearances in newspapers, he certainly seemed to be living the life of a country squire. Stella’s mother was Frederica Gertrude, of the Bouverie family of Delapre Abbey in Northamptonshire. Frederica's probate record of 1963 places her at Great Linford.

Stella was to be last of the Great Linford Uthwatts, selling the manor house and grounds to the nascent Milton Keynes Development Corporation at some point in the late 1960s or early 1970s. She was however a major figure in the life of the village.

We know little of her early upbringing, but she is at Glebe House as an infant (it was probably not then named Glebe House) in 1911, recorded on the census for that year with her parents and 3 servants, one of whom was a nursemaid. By the time of the 1939 Register, conducted on the eve of war, Stella is still to be found at Great Linford, almost certainly at Glebe House (the record is not precise) with her 70 year old father and several servants. Stella is by now 29 years of age.

Stella in the WAAF

In 1939, she joined the Women’s Auxiliary Air Force, better known by their famous acronym, the WAAF. Stella joined the 30th Buckinghamshire Company as a class F reservist, denoting eligibility for mobilisation upon the outbreak of war. Her service number was 880254. Initially she was an Assistant Section Officer, the lowest rank in the service, but by 1942 she had been promoted to a War Substantive Section Officer in the Administrative and Special Duties Branch.

This is rather intriguing, as the Administrative and Special Duties Branch was the RAF intelligence service, formally known as General Duties (Admin) Branch. Exactly what this role entailed for Stella has not yet come to light, but thanks to several open records available in US archives, we can see that she passed through the famous Ellis Island immigration facility on January 1st, 1945, having travelled on the Mauretania (an ocean liner pressed into military service) and from there travelled by air to San Diego, the record of her travels recording that she was on “RAF duties” with the 280 Wing. 280 Wing was concerned with the logistics of transporting aircraft from their place of manufacture to theatres of operation.
​
The record also gives us some information on Stella’s appearance, that she was 5 feet 2 and a half inches high, her complexion was fair, hair fair and eyes blue.

Service to the community

Stella never married, but defied convention and chose a different path in life. She was active in local politics and having first represented Great Linford on its parish council, made a trailblazing contribution to public life when in November 1950 she succeeded to her late father Gerard’s seat on the Newport Pagnell Rural District Council, the first women in its 56-year history to break through this barrier. One of the earliest meetings she attended was reported that same month, during which the council made a decision that all the council’s workmen were to be issued with one bar of soap per month. 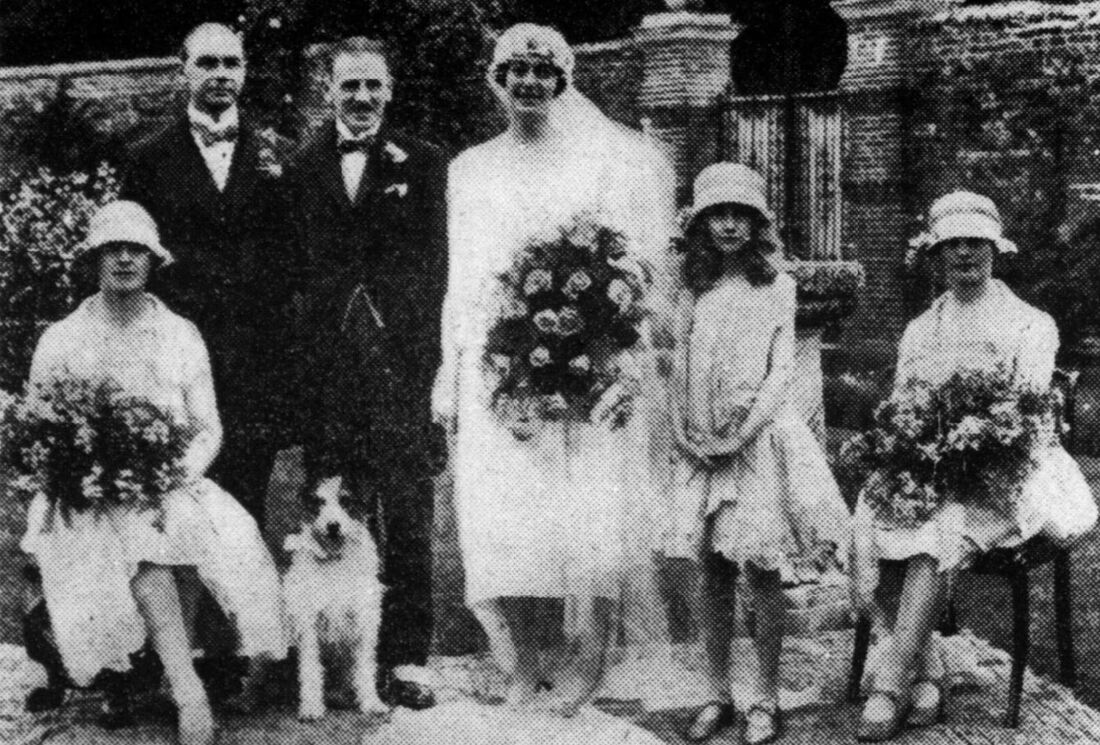 Stella was a bridesmaid at the wedding of her cousin Violet Maud Chapmen in June 1926. Presumably Stella is pictured above.
The following year, Stella is mentioned as attending a meeting to discuss the provision of a mains water supply to Great Linford, though no resolution was arrived at, and it remains uncertain when the village was finally availed of a modern water supply, though a “Miss Uthwatt” of the Manor House was advertising for a tractor driver in September of 1952, the job coming supplied with a house in the village, with “electric light and water laid on.” It is equally unclear if the “Miss Uthwatt” seeking a tractor driver was Stella, it may well have been her mother, Frederica.

Stella did not limit herself to her council work, she is mentioned as the chair of the Great Linford branch of the Women’s Legion, otherwise known as the “women’s section” of the British Legion. She was chair from at least 1951 through to 1954, perhaps later.

Master of the Bucks Otter Hunt

Unsurprisingly, Stella had inherited the family’s passion for Otter hunting, and several newspaper and magazine accounts can be found detailing the activities of the Bucks Otter Hunt under her management. She is pictured leading the hunt in the Coventry Evening Telegraph of Friday September 23rd, 1955, and in 1959, The Times newspaper wrote in admiring terms of the Bucks Otter Hunt, naming Stella as master. 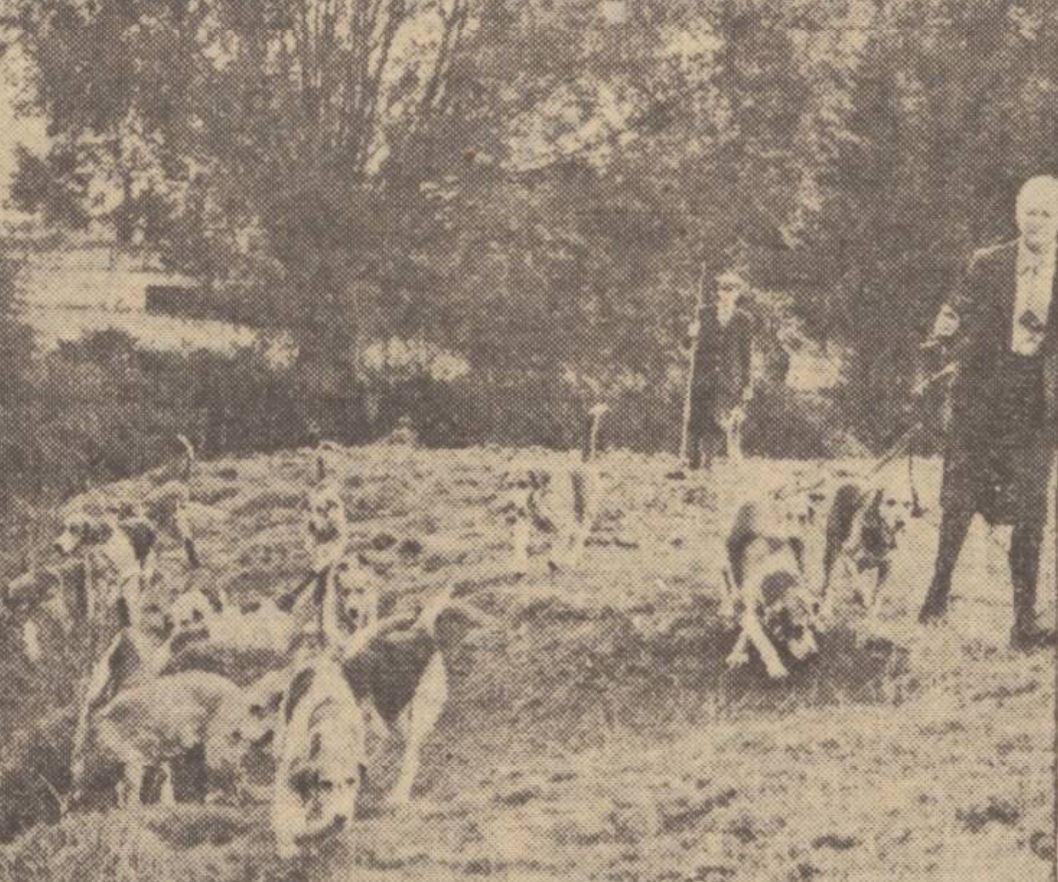 Stella leading the Bucks Otter Hunt circa 1955
​Exactly what position Stella held as regards the ownership of the Great Linford estate is somewhat hazy, but she certainly behaved as if the estate was hers; technically the estate had always passed down the male line. A booklet produced for the 2001 Waterside Festival held at Great Linford offers a fascinating little vignette of Stella told by older residents, recalling her, shotgun over arm, patrolling the manor grounds. Those who encountered her addressed her as “Miss Stella.”

The last of the Great Linford Uthwatts

What is certain is that at some point Stella vacated Glebe House, the manor was sold to the Milton Keynes Development Corporation, and she relocated to Perth in Scotland. A newspaper article in the Perthshire Advertiser of Friday August 2nd, 1996, reports that just before her death, Stella had allowed for a minimal rent paid by Perth and Kinross Council, public access to land at Crief called St. Mary’s Walk. Stella had in fact been living in Crief, at a property called Laggan House, but also appeared to have an interest in the Laggan Estate, located on the Hebridean Island of Islay. She died at Laggan House on May 14th, 1996, aged 85, and was cremated at Perth crematorium. Here then, ends the story of the Uthwatts of Great Linford.