William was married on October 3rd, 1934, to Mary Evelyn Adams, daughter of a Muswell Hill dairy farmer named Peter Milgate Adams and his wife Caroline Mary Whiting. The wedding was of sufficient interest to rate a front cover photograph in the Daily Mirror newspaper of the following day, with the couple surrounded by the hounds of the Bucks Otter Hunt and fellow hunt members forming a guard of honour with hunting sticks. The reporter spelt the name as Outwaitt, (which must have been annoying to the family) but assuming it was not another error, the picture caption reveals that the bride went by the sobriquet Molly. It is interesting that unlike previous Uthwatt marriages that united large, landed families, this seems a more middle class liaison, though still celebrated in grand style. 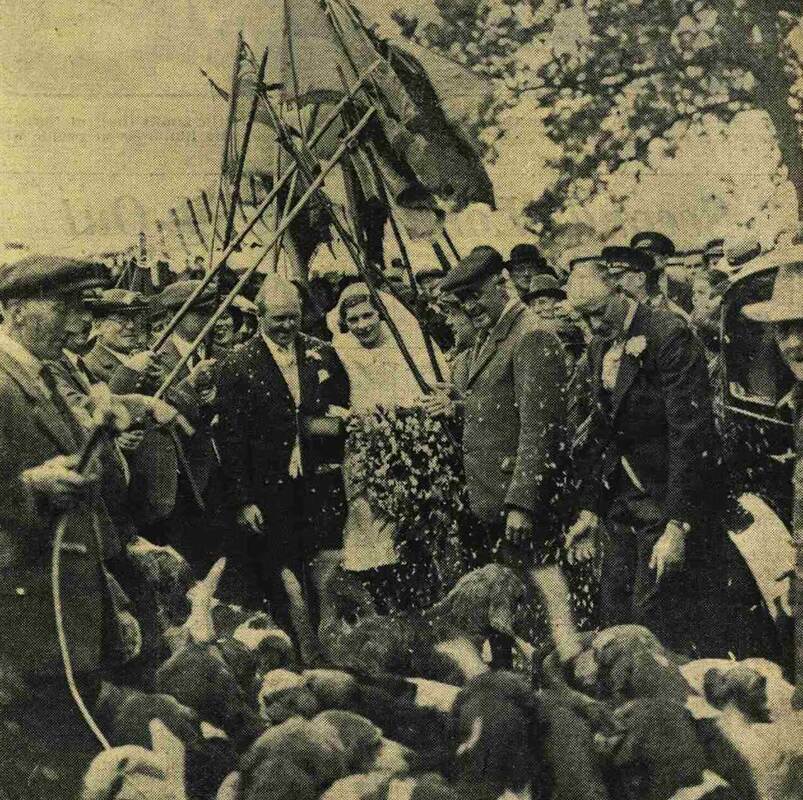 Marriage of William Rupert Edolph Andrewes Uthwatt and Mary Evelyn Adams
They appear to have had a single child, a son named William Rupert Anthony Andrewes Uthwatt, born March 4th, 1939. The family are recorded at the Manor House on the 1939 register, a document that was prepared in aid of the imposition of ration cards during World War 2. William is noted as a “landed proprietor.”

Perhaps because the role of Lord of the Manor had by now diminished significantly in stature and importance, there are fewer column inches in the local press devoted to the families’ activities, though William can still be found occupying a number of local and civic posts, including that of Chairman of a branch of the British Legion, the inaugural meeting for which was held in the village on November 20th, 1928. He also occupied the post of Rector’s Warden in the village.

Under William, the family continued to be a driving force behind the Bucks Otter Hounds, with William occupying (as had his father) the post of master of the hunt. Various society magazines such as the Illustrated Sporting and Dramatic News and The Tatler carried reports and photographs of the hunt during William’s tenure. He was also active in Fox Hunting, riding with the Whaddon hunt, as well as being master for a time of the Grove hunt; he hosted Princess Margaret at one meet in November of 1944.

William served in World War One as a Second Lieutenant in the Royal Highlanders (the Black Watch), being promoted to full Lieutenant by 1918. The 1921 census places William in the household of his brother Gerard and makes reference to his continuing service in the Royal Highlanders. He was a reserve during World War Two and in later life was known as Major Uthwatt-Bouverie.

William died at the relatively young age of 56, on December 17th, 1954 at Northampton Hospital after an illness of five weeks. He was buried at Great Linford on the 21st. He had not been living at the manor house, but at Grange Farm where he farmed. He left his Otter hound pack to the hunt committee and was succeeded by his 15 year old son William Rupert Anthony Andrewes Uthwatt, though it is not entirely clear if he ever assumed the role of Lord of the Manor. However, this was not quite the end of the family’s influence at Great Linford, as Gerard Uthwatt’s daughter Stella seems to have become the preeminent Uthwatt in the village and master of the Otter hounds. She would be the last of the Great Linford Uthwatts.