​​
​With a family as extensive as the Uthwatts, we can find several other persons of note, either with prominent connections to Great Linford or of general historical interest. 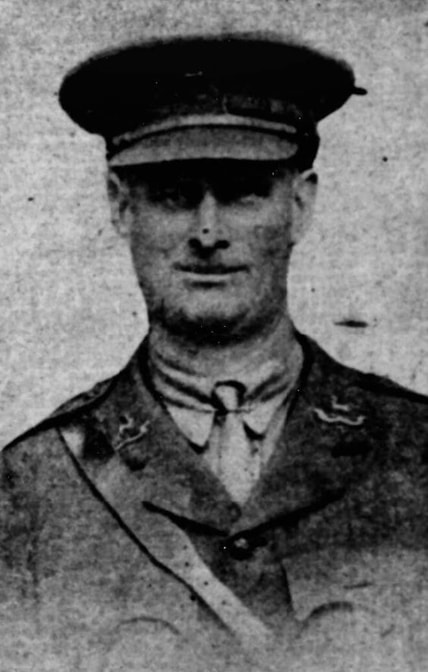 Gerard Thomas Andrewes Chapman Uthwatt, cicra 1919
Gerard never attained the lordship of the manor, the position going to his brother William Francis Edolph Andrewes Uthwatt, but Gerard was nonetheless a prominent resident of the village all of his life. Most notably, he served on the Newport Pagnell Rural District Council for 15 years, and also appears to have sat on the Board of Guardians, responsible for administering the poor law. When he first ran for council office in 1919, he wrote a letter to the electorate which was published in the Wolverton Express newspaper; this provides some interesting details of his life and policies.

He emphasised his military career during World War One (making sure have an accompanying picture published of him in uniform) and offered the expectation that he could count on the votes of the rank and file. Not unsurprisingly he had been commissioned as an officer, and had served with the 48th division, 1/7th Battalion of the Royal Warwickshire Regiment. The regiment arrived in La Harve, France in March 1915, moved to Italy in 1917 and then back to France in 1918.

Gerard was avowedly against party politics in local elections, so stood as an independent. His letter alludes to his position as a founding member of the Great Linford Housing Society, the stated aim of which was to, “provide a thoroughly satisfactory type of house for the working classes”, though no further records seems to exist of its activities or indeed if it ever succeeded in building any houses.

Gerard and his brother William had married sisters from the Bouverie family of Delepre Park in Northamptonshire; Gerard to Frederica Gertrude Bouverie and William to Catherine Jane Bouverie. Unfortunately, William’s marriage had ended in divorce, but Gerard and Frederica’s marriage seemed to be on firmer ground, as evidenced by the memorial to the couple in St. Andrews church. Gerard and Frederica had only one child, Stella Katherine Andrewes Uthwatt, destined to be the last of the Uthwatts of Great Linford.
​
It appears that the family resided at Ivy House in Great Linford for a time, as an account of a hunting accident in 1907 makes passing reference to the injured rider being conveyed to Ivy House, the residence of Mr Gerard Uthwatt. Ivy House has also gone by the name Elmhurst and Linford Lodge, and still stands to this day a short way off The Green. From 1911, we find Gerard and his family on The High Street, at the property now known as Glebe House.

Unsurprisingly Gerard was, along with his brother, a key member of the Buckinghamshire Otter Hunt, which was based in the manor grounds. His blood sport interests also extended to Fox Hunting, riding with the Whaddon Chase Hounds, for whom he served as secretary. Additionally, he was a keen bell ringer and a Captain of the Great Linford Cricket Club.

Unfortunately, we also get some strong hints that Gerard was very much of the opinion that his status afforded him the right to be particularly firm in his dealings with the residents of the parish, an attitude that in this day and age we would find quite shocking and indeed unacceptable. Several court cases lay bare his approach, the first of which occurred in October of 1899, when Gerard would have been 27 years of age. He had been summoned to answer to a charge of assaulting a Thomas Arthur Sapwell.

The case is reported on in detail in Croydon’s Weekly Standard newspaper, the pertinent details of which are as follows. Thomas had been standing by the church gates, when seeing a woman approach had opened the gate for her. Gerard them appeared and demanded to know why he had not then shut the gate, and becoming enraged, had grabbed Thomas by the throat and threatened to, “cut his guts out.” Thomas met up with Gerard a little later and demanded an apology, but was told to, “go to hell” and after more words were exchanged, Gerard cuffed Thomas around the ears and pinned him to a wall. At this point Gerard’s brother arrived on the scene and threatened consequences if Thomas did not behave himself.

The gate appears to have been a sore point for the Uthwatts, (it may actually have been the main gate off the High Street into the manor grounds), as it was felt important to be kept shut to keep horses secure and also to discourage pilfering by the village children of wallnuts. Gerard’s defence hinged on the argument that his actions were justifiably provoked, but with witnesses to support Thomas, this rather thin excuse was dismissed by the magistrates, who ordered Gerard to pay 30 shillings plus costs, or 14 days in jail.

Gerard’s people skills had not much improved by 1929, when he again found himself in court, this time attempting (unsuccessfully) to bring a charge of poaching against a man named Charles Simpson. Charles was having none of it, and when asked why he had refused to provide his name when demanded of it by Gerard, told the court that he wasn’t going to do that to someone who spoke to him like, “a Prussian Sergeant-Major talking to a recruit with a dirty rifle.”

These stories clearly paint an unflattering portrait of Gerard Uthwatt and nor does it bode particularly well that at about the time of the first case, Gerard was actually the Parish Constable, so responsible for the application of the rule of law and conduct in Great Linford.

Thomas Andrewes Uthwatt (1847-1927) was the son of Eusebius Andrews Uthwatt and Jane Lucy Hutton. Eusebius was the 5th son of Henry Uthwatt Andrewes, who on inheriting the manor in 1800 had changed his name to Henry Uthwatt Uthwatt.

Born in Foscott in Buckinghamshire, it appears that sometime between 1861 and 1871, Thomas had migrated to Australia, there to pursue a career in mining. He settled in Ballarat in Central Western Victoria and married circa 1875 an Annie Hazlitt, and over the next decade had 6 children together. Several of these are worth noting.

Louis Andrewes Uthwatt was born on October 31st, 1885, at Ballarat, Australia. We know nothing of his life in Australia, but by 1905 he was back in the UK as we have a record of his service in the Royal East Kent Regiment, known as The Buffs. His address is given as The Manor at Maids Morton. By the time of the 1911 census, we find Louis at Southsea, living with his parents. Unsurprisingly given his age and prior military service, we find that he was on active duty during World War 1.

He married Diana Beatrice Daly on August 14th, 1924, at St. James, Piccadilly; the officiating priest was his brother William. Though the marriage took place in London, the parish record states that Louis’s place of residence was The Rectory at Great Linford. It also records his profession as a Motorcycle Manufacturer. This raises the intriguing possibility that The Rectory at this time was not being used (as was generally traditional) as a home for the Rector, but as place where motorcycles were being made.

We do know that his business was known as the Warrior Motor Cycle Co, but it is not entirely clear how long it operated for and if it was successful. Louis was in court several times in disputes with suppliers, notably a local engineer named Frank William Field who lived on The High Street. They were counter suing each other in March of 1925, Louis over a claim of damage to a bench and disagreement over how Frank was to be paid and Frank for unpaid wages of £1 and 9 shillings. In the final judgements, both won damages, essentially cancelling out each other’s claims. Perhaps the most interesting aspect of the case is that Louis’s claim for damages to a bench stemmed from the fact that Frank had used a lose plank from it to make a crate, in order to ship a bike to India.

On the same day, Louis was also suing an A. H. Salter of Gunville on the Isle of Wight over a sum of £20 owned him. As Salter failed to appear in person, Louis was won this case.

Unfortunately, no documents such as sales brochures have yet surfaced to give us any certain idea of the motorbikes being constructed at Great Linford, but an advertisement published in the Bedfordshire Times and Independent newspaper on March 9th, 1923 by an Oakley Garage located in Bedford does feature Warrior bikes, which very conceivably are the machines manufactured and sold by Louis.

Louis died on December 28th, 1936, at Weston-Super-Mare in Somerset, but was buried at Great Linford.

The grave of Louis Andrewes Uthwatt in the churchyard of St. Andrewes, Great Linford. 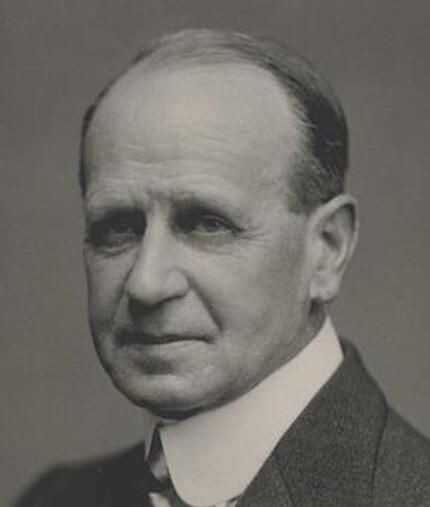 Lord Augustus Andrewes Uthwatt (1879–1949)
Born in Ballarat, Australia on April 25th, 1879, Augustus Andrewes Uthwatt never lived in Great Linford (he may well have visited), but having been educated in Australia, he relocated to the UK and became a well-known figure in judicial circles, with his name attached to an important war time document known as the Expert Committee on Compensation and Betterment, but more commonly remembered as the Uthwatt Report.

Delivered in 1942, the Uthwatt report made recommendations for post-war development and reconstruction which led to the passing of the Town and County Planning Bills. It is considered an important report and was well received by the Labour Party, who agitated for it to be combined with the Beveridge Report, which had been issued the same year and recommended widespread reform of social welfare provision in the country. That the government shelved the Uthwatt report (the war being its primary focus) was used as a political attack point in the election campaign of 1945 that saw Labour achieve a landslide win.

Augustus died at his home in Sandwich, Kent, on April 24th, 1949, leaving a widow, Many Baxter Uthwatt, nee Meeres.

The Uthwatt family tree is large and labyrinthian, and sometimes a name emerges from the records that defies our best effort to fit into the jigsaw. One such case is that of a Richard Uthwatt who crops up in several Buckinghamshire records in the late 1600s and early 1700s.

The name Richard is one chosen with tedious monotony by the Uthwatts, so exactly which Richard these records refer to is highly uncertain. The only Richard that would fit by date is the one born 1658 and died 1719, but given that he did not inherit Great Linford until 1704, it is difficult to square these Buckinghamshire records with him. For instance, the calendar of Treasury Books, Volume 8, 1685-1689, contains an entry with the following line, dated March 7th, 1685.

Appending: note of (a) complaint dated Jan. 12 last from the Justices of Peace of co. Bucks against Richard Uthwat, a Hearthmoney officer.

Unfortunately, the original complaint of January 12th has not yet come to light, but the entry is interesting, not least because the job was far from a popular one, relating to the so-called hearth tax. This was a much resented and intrusive levy that was imposed in 1662 and required its collectors to count the number of fireplaces and stoves in each dwelling, for which a charge was made of 1 shilling each.

We also find a record in the Handbook of Dignities published 1851, identifying a Richard Uthwayte amongst others as one of the Commissioners of Stamp Duties in England in 1702.

Highly circumstantially given that both relate to the gathering of taxes, these records seem to point to the same man, but until some unifying piece of evidence can be found to identify him, this must remain nothing more than speculation.