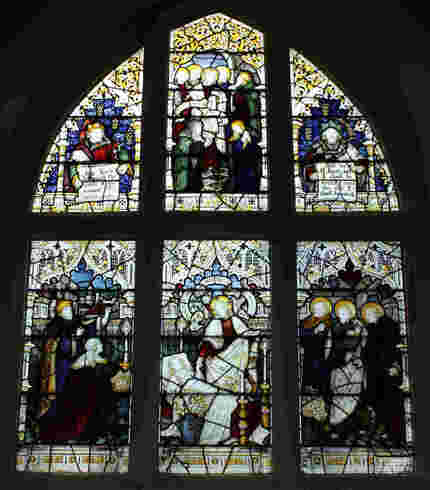 The Raising of Jairus' Daughter.
It is impossible to know precisely when the first stained glass windows were installed in St. Andrews Church at Great Linford, but it seems likely that during a substantial restoration that took place in 1707, an unknown number of windows of medieval origin were removed and sadly disposed of. We can be confident of this, as during archaeological investigations in 1980, just over 150 fragments of medieval window glass, many painted, were found in a rubble layer within the church and in a sewer trench by the pavilions in the Arts Centre car park. These finds were identified as having been deposited during the 1707 work.

The fragments can be dated by stylistic comparison, which places them in a date range between the early 14th to late 16th century. Of the 14th century fragments, none show any figures, though one illustrates an architectural feature known as a finial, which typically  stands atop the apex of a roof or spire. This is suggestive of some religious imagery having been included, as it was customary at the time to place a single (religious) figure within an architectural framework. Also found were a variety of fragments identified as edging patterns, again suggesting the possibility that they encompassed religious figures. One particular design found in the rubble was a repeated pattern of circles within circles enclosed by vertical straight lines; this same pattern surrounds a late 14th century figure of St. Peter at Western Underwood in Buckinghamshire, and is used again in the same way at Lower Winchendon (also Buckinghamshire) in a 15th century window.

Of the 15th century window fragments discovered at Great Linford, six show remnants of religion inscriptions and figures. Several feature what have been interpreted as patterned halos, probably dating from the second half of the 15th century, or early 16th. Also found was a fragment of a bare foot and part of a hem, as well as number of partial heads, including one figure with a beard and wavy hair. This figure was likely created in the first half of the 15th century, in what was known as the International Gothic Style. Another fragment depicts a tiled floor; saints are frequently depicted as standing on tile floors in 15th and early 16th century church windows.

There is additionally an account that four shields of arms were recorded in the church windows circa 1587, including the arms of the Bohun and Tolthorpe families, but it is by no means certain that the fragments of glass recovered have any relationship to those destroyed in 1707. Writing in his 1847 book The History and Antiquities of the County of Buckingham, George Lipscomb offers the following rather opaque heraldic descriptions of the shields.

The following arms remained in the windows about 1587: 1. Arg. On a bend Gu. Three roses Arg. 2. Arg. a saltire Gu (being Tolthorpe, as in Emberton Church). 3. Arg. a fess Gu. In dexter corner a mullet. 4. A bend between six lions ramp. For Bohun.

The following is an explanation of the heraldic terms.

Arg: Likely to be an abbreviation of Argent, a tincture with the colour silver.

Dexter: To the right.

Fess: a horizontal stripe across the shield

Gu: Likely to be an abbreviation of Gules, a tincture with the colour red.

Mullet: A star with straight sides, typically having five or six points.

Saltire: A St. Andrew’s cross.
This is entirely circumstantial evidence, especially when we consider that William held over 100 estates throughout the country, and that the name Tolthorpe (however it is spelt) cannot in any way be directly connected to Great Linford. The cryptic reference to the nearby village of Emberton also draws a blank; presumably it implies that Emberton church also had a Tolthorpe coat of arms in a window.

It should be noted that a tiny amount of original medieval glass from the fourteenth or fifteenth does survive in St. Andrews, an intricate mixture of painted patterns and fleur-de-lis (an Iris flower design associated with the Virgin Mary and purity), which can be seen at the head of the north east window.

A more recent reference to the installation of some "coloured glass" is to be found inside the church. A memorial inscription to the Uthwatt family includes the information that coloured glass was added to the window in the East Chancel under the terms of the will of Mary Uthwatt, who died 1885.

We do know the history of several of the more subsequently added windows. Thus we find in December of 1904, a story reported in Croydon’s Weekly News that J. Baily Esquire, had donated a new stained glass window to the church in memory of his late son, William Oakley Baily. Joseph Baily had been a farmer in the nearby Buckinghamshire village of Shenley, doing quite well for himself judging by the 250 acres he farmed, but he had been divorced by his wife in 1861 (quite an unusual occurrence) and from 1871 we find him at Great Linford; perhaps given the social shame associated with the separation, he felt he could no longer stay at Shenley. His son William had died at Brighton in 1902 of appendicitis, and Joseph Baily himself passed away at Great Linford in 1909, leaving behind a significant legacy of over £12,000, so hardly surprising he could afford the window at St. Andrews (which must have been pricey), but also other donations toward the memory of his son, including £1000 to Northampton Hospital.

We have a very good description of the window at St. Andrews, which is reproduced below from Croydon’s Weekly News.

The new memorial window, which is a splendid acquisition to the ornamentation of St. Andrew’s Church, is illustrative of the Christian subject – The Good Samaritan, and comprises four dramatic groups. The first, the banditti who had robbed the traveller; the second, the Samaritan befriending him; the third, the priest and the Levite leaving him to his fate; while in the centre opening above is convalescence at the inn, and the departure of the Samaritan. In the two little half lunettes are the half figures of a prophet and evangelist, with scrolls bearing upon the story. The subject, a most difficult one, has been admirably treated by the skilful artist, Mr C. E. Kempe, of Nottingham Place, London, W., whose work is undoubtedly a complete success, and has given, we fully believe, the greatest satisfaction to the generous donor of this handsome window. Beneath it is affixed a brass plate bearing the following inscription – “Giving thanks to God for the dear memory of William Oakley Baily, who died 12th May, 1902, his father dedicates this window.”

The maker of the window, the firm of Charles Eamer Kempe was in operation between 1866 and 1934, Charles Kempe himself having died in 1906. The Kempe firm had perfected a manufacturing technique that used a silver stain on clear glass to leave a distinctive translucent yellow tint.

The Baily family continued to be patrons of the church, as in 1910 we find another window attributed to them, this time dedicated to Joseph Baily and paid for by his son, Charles Chetwode Baily, who like his late sibling William appears to have been domiciled in Brighton. Charles’s financial reserves were certainly more than sufficient to cover the cost of the window, since at his death in 1914, he left a not inconsiderable fortune of over £188,000. Charles was in the brewing trade, with a major investment in the Rock Brewery of Brighton, and appears to have been a dedicated philanthropist like his father, with an impressively generous list of bequests in his will, including money for the building of a lifeboat to be based on the Scottish coast.  Though he died at Great Linford, the Baily family vault was at Old Bradwell, and it was to there that Joseph Baily was conveyed for burial. However, his connection to Great Linford were undoubtedly strong, as he was for instance a founder member of the Bucks Otter Hounds, which were based for many years in the manor grounds of Great Linford, and as related in his obituary, (carried in Croydon’s Weekly Standard newspaper), he was well respected by the poor people of Great Linford.

The installation of the window itself does not appear to have been reported in the local press, but its subject matter is the raising of raising of Jairus' daughter, and like the previous window paid for by the Bailys, was manufactured by the firm of Charles Eamer Kempe.

The window located to the south side of the chancel was also installed as a memorial, in this case to the Reverend Sydney Herbert Williams, who had died on December 30th, 1899. The window was dedicated to him on Easter Sunday of April 7th, 1901 and in an article carried in Croydon's Weekly Standard newspaper was described as following:

The figures of Our Saviour, the light of the world, and Our Saviour as the Good Shepherd, with the inscription “I am the light of the world; I am the Good Shepherd." The Top part of the window is filled with adoring angels. At the foot is the following inscription. "To the glory of God, in memory of Sydney Herbert Williams, 23 years Rector, Born August, 1844. Died December, 1899. "The window was designed and carried out by Messrs. Jones & Willis, of Portland-street, London.

Window dedicated to the memory of the Reverend Sydney Herbert Williams. Photo credit Jill Clarke/St. Andrews Church.
Jones and Willis had started out in business in Manchester circa 1847 making church furniture, but by about 1880 had branched out into making stained glass windows, becoming one of the largest such firms in the country and subsequently opening premises in Liverpool and London.

Unfortunately none of these accounts make mention of the previous windows that were replaced, so we do not know the lost designs, or why they were deemed worthy of replacement.

The other windows in the church depict to the east, Christ in Majesty with Saints & Martyrs and in the Chancel, a simple Latin Cross with St. Andrew Cross; the makers are presently unknown.