The following monumental (memorial) brass and stone inscriptions are to be found within St. Andrews Church in Great Linford. These would have been paid for by family with significant financial resources or perhaps by subscription by well-wishers. Hence it is not surprising we find the Prichard and Uthwatt families commemorated, both of whom were Lords of the Manor, but there are also many other prominent persons to be found, including several Rectors of the church.

Henry Bird was born in Great Linford on March 23rd, 1823, the son of James Bird, a carpenter and builder, and Catherine Smith. He trained as a joiner in his father's footsteps, but by the time of his passing was described as a retired farmer, having occupied Windmill Hill Farm on the High Street for several years. He passed away not in Great Linford, but at the home of his daughter Marian in Margate, Kent, who nonetheless caused this plaque to her mother and father to be installed in St. Andrews. 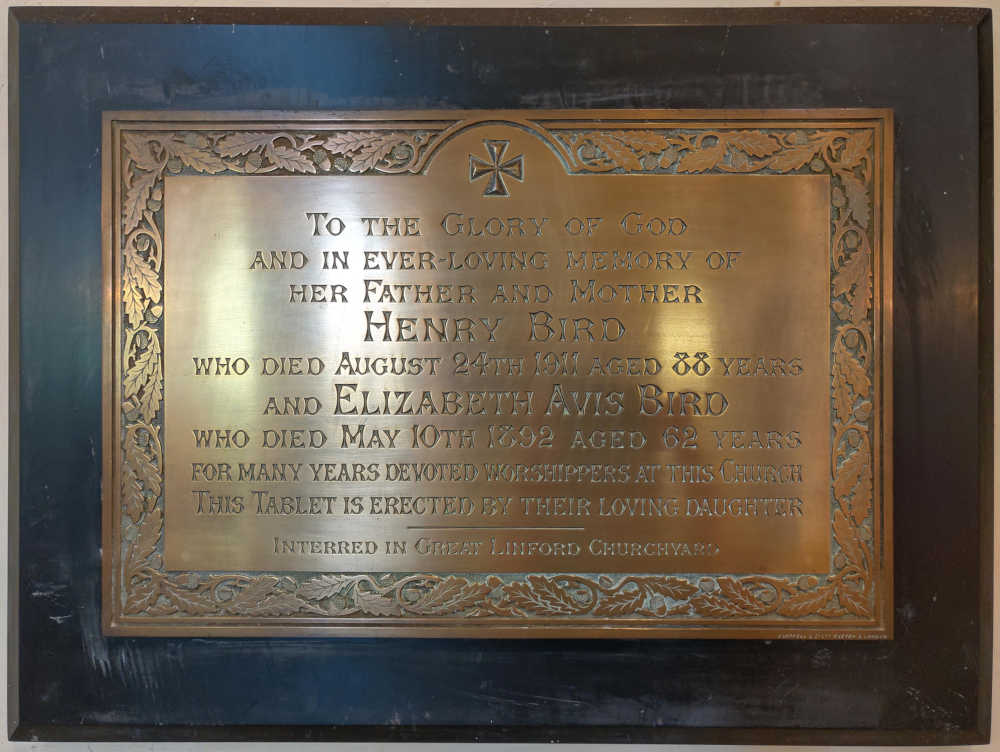 The inscription reads:
TO THE GLORY OF GOD
AND IN EVER LOVING MEMORY OF
HER FATHER AND MOTHER
HENRY BIRD
WHO DIED AUGUST 25TH 1911 AGED 88 YEARS
AND ELIZABETH AVIS BIRD
WHO DIED MAY 10TH 1892 AGED 62 YEARS
FOR MANY YEARS DEVOTED WORSHIPPERS AT THIS CHURCH
THIS TABLET IS ERECTED BY THEIR LOVING DAUGHTER
INTERRED IN GREAT LINFORD CHURCHYARD

The Clodes hailed originally from Windsor, where they had a business selling wines. John Clode moved to Great Linford around 1839, setting up as farmer. He and his wife Mary had 11 children, all but the first born in Great Linford. There are also several Clode gravestones in St. Andrew's churchyard, including one commemorating a son named Harry, who passed away in South Africa. 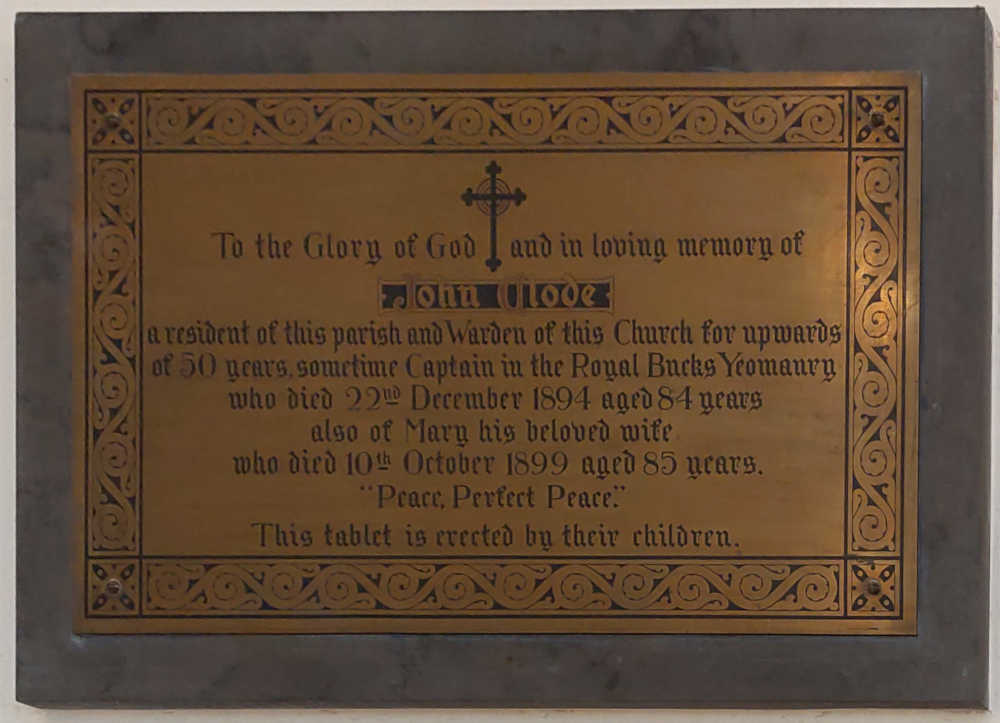 The inscription reads:
To the Glory of God and in loving memory of
John Clode
a resident of this parish and warden of this Church for upwards
of 50 years, sometime Captain in the Royal Bucks Yeomanry
who died 22nd December 1894 aged 84 years
also of Mary his beloved wife
who died 10th October 1899 aged 85 years
"Peace, Perfect Peace."
This table is erected by their children.

John Coles was appointed Rector of Great Linford by Sir William Prichard on February 4th, 1699 and died in the office on June 30th, 1748.  He and wife are commemorated on the wall of the church. 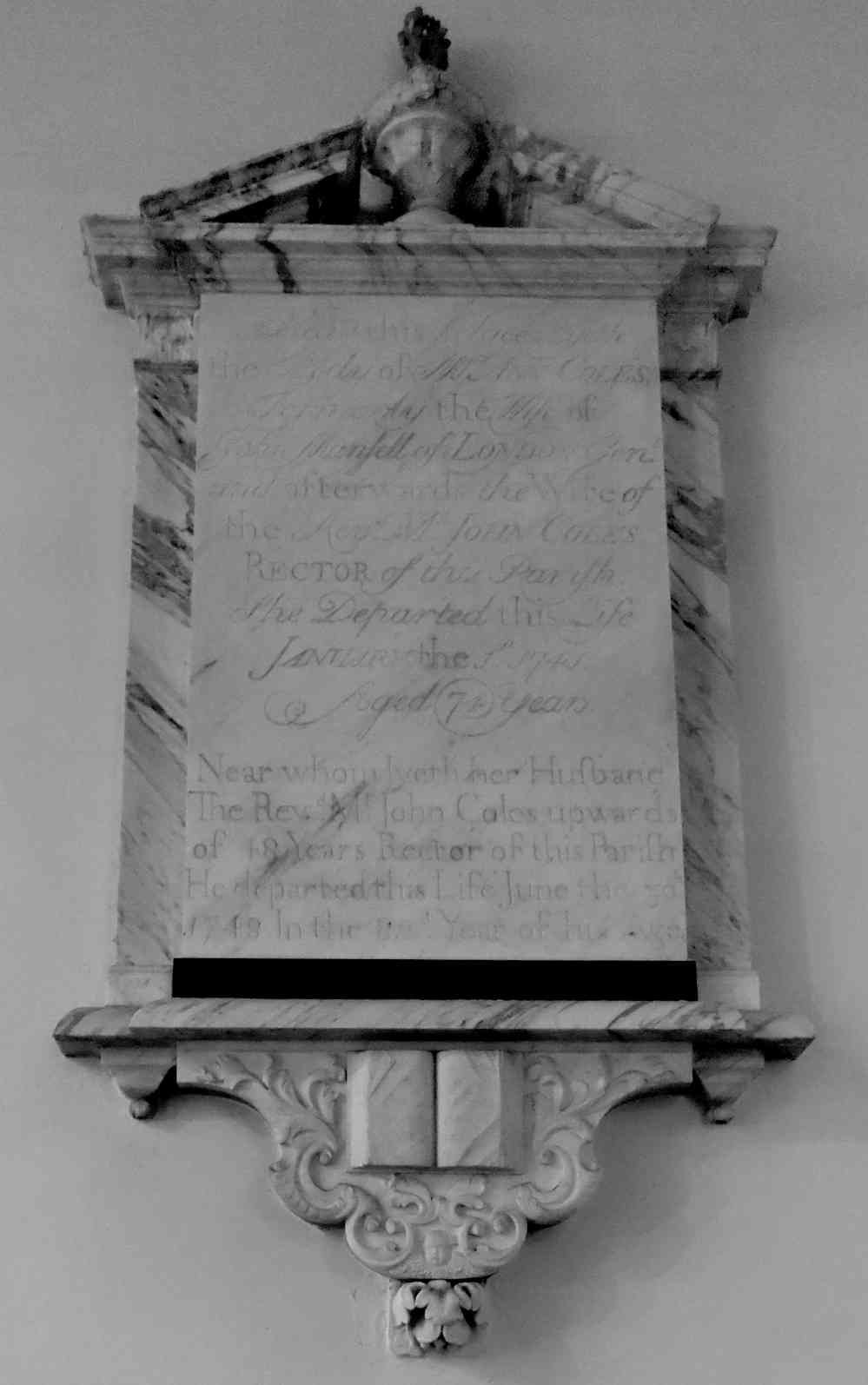 Near whom lyeth her Husband
The Rev'd Mr John Coles upwards
of 48 Years Rector of this Parish
He departed this life June the 30th
1748 in the 89th Year of his Age
Both are buried in a vault beneath the church floor, with the location also recorded on the floor.

Little is presently known of Edward Harrison, other than he had a wife named Elizabeth and that he owned land in the country of York.

The inscription reads
HERE LIETH THE BODY OF
EDWARD HARRISON GENT
WHO DEPARTED THIS
LIFE THE 24 DAY OF APRIL
DOMINI 1676 AND IN THE
?? YEAR OF HIS AGE

Roger Hunt is likely to be the son of the like named Roger Hunt, who in a long career had been elected eighteen times to Parliament and had for a time been speaker. Roger Hunt snr died circa 1455, where upon his son inherited his estates in Huntingdon. There are no specific references to an association with Great Linford, which makes the fact of the burial of he and his wife in St. Andrews rather perplexing. 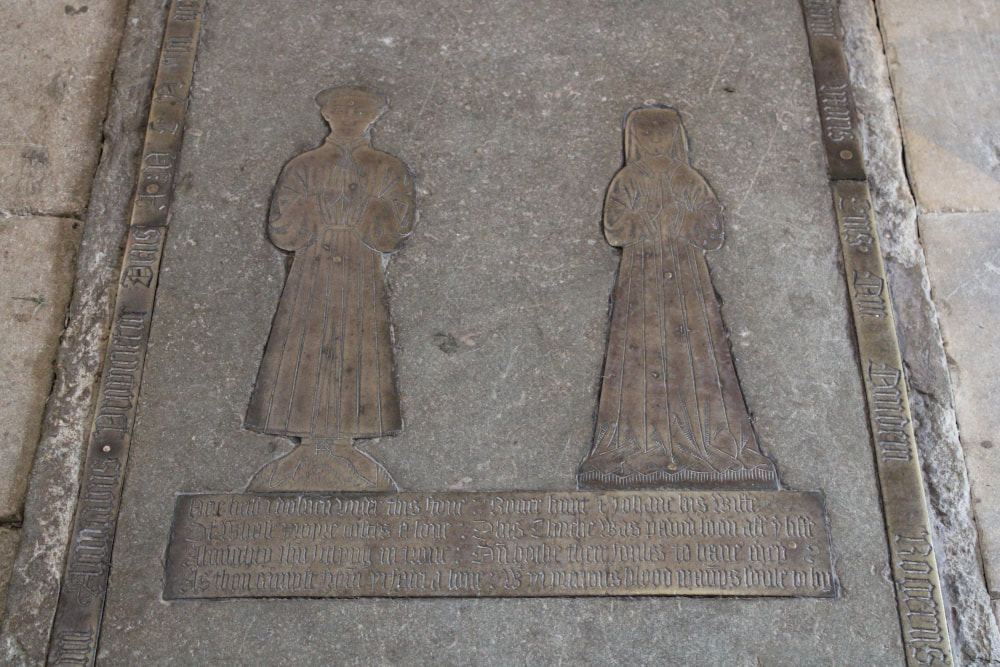 The inscription reads:
Here lieth I dowen under this stone Roger hunt and Johane his wiffe
of whose propre costes alone This chirche was paved soon aft' ye liffe
Almighty Jhu sittyng in trone bothe their soules to have m'cy
As thou camyst from yi fader alone Wt yi precious blood manys soule to by.

The name Malyn (Malin) is one that crops up in a number of records pertaining to Great Linford, including the estate map of 1641. A house on the modern day High Street bears the name Malins Farm. 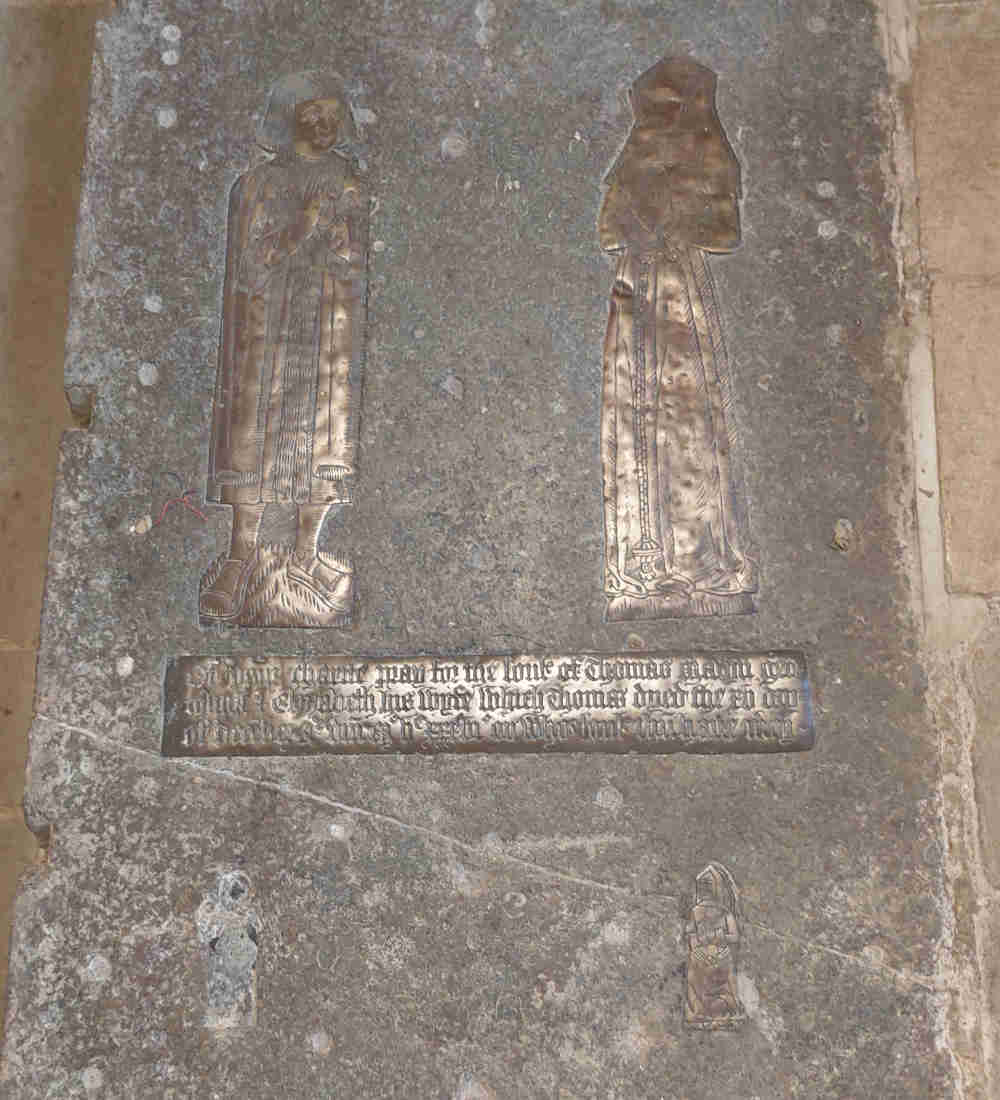 The inscription reads:
Of your charity pray for the soul of Thomas Malyn Gent-
leman & Elizabeth his wife which Thomas died the XV day
of December Anno Domini MDXXXVI on whose souls thou have mercy
XV is the Roman numerals for the 15. MDXXXVI is 1536. The inscription has several abbreviations, which makes it troublesome to read, so the above transcription is subject to some interpretation. The smaller figures illustrated below may represent a son and daughter.

William Prichard (also spelt Pritchard) was a London merchant who in 1678 purchased the manor house and its grounds from the Napier family, who had fallen into debt. 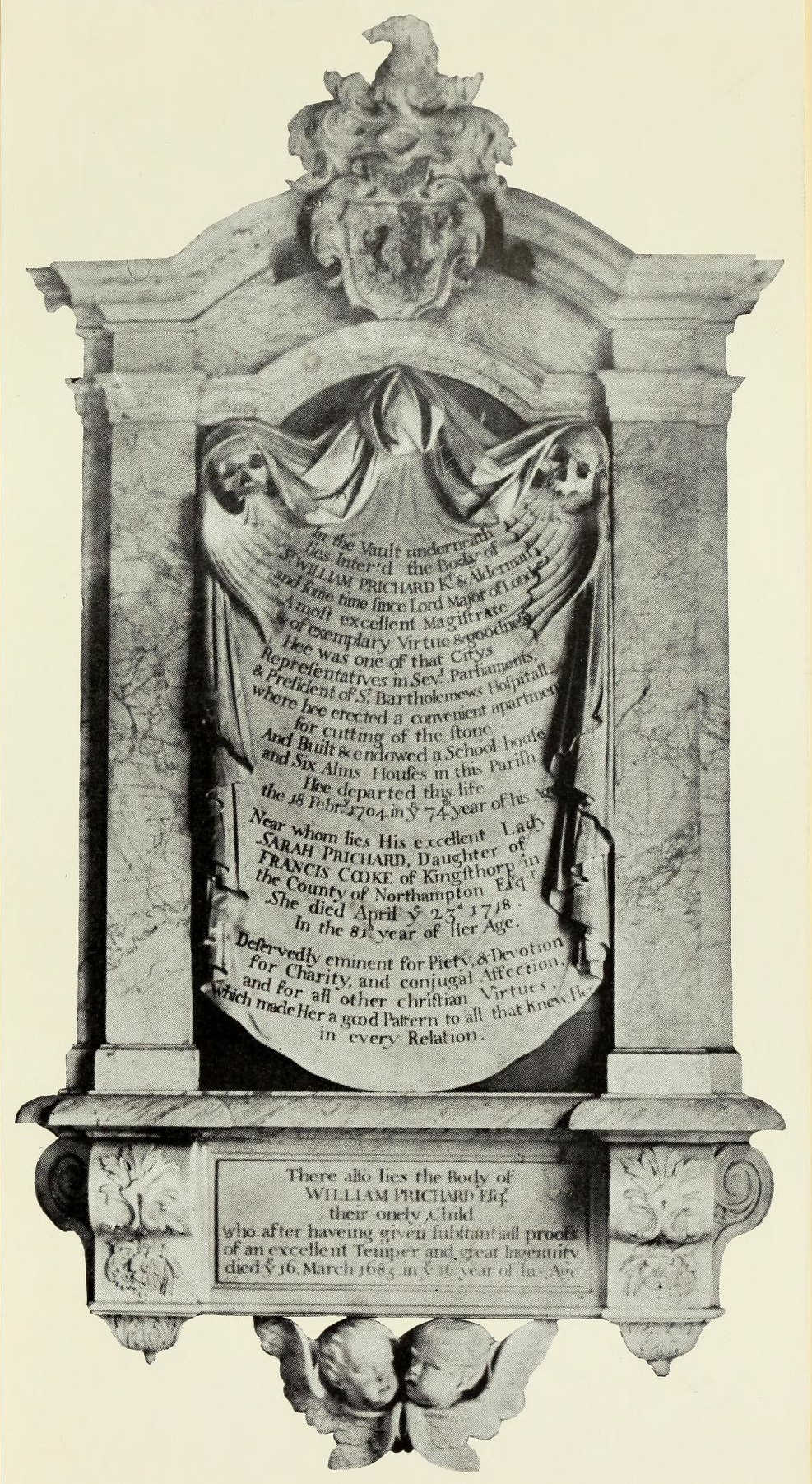 Above: From "A historical catalogue of the pictures, herse-cloths & tapestry at Merchant taylors' hall with a list of the sculptures & engravings" published 1907.
​The inscription reads:
In the Vault underneath
lies inter'd the Body of
Sir William Prichard Kt and Alderman
and some time since Lord Mayor of London
A most excellent magistrate
& of exemplary virtue and goodnefs
Hee was one of that citys
representatives in sevl parliaments
A president of St Bartholomews Hospital
​where hee erected a convenient apartment
for cutting of the stone
And built and endowed a School house
and Six Alms Houses in this Parish
Hee departed this life
the 18th Febry 1704 in ye 74th year of his Age

Near whom lies His excellent Lady
SARAH PRICHARD, Daughter of
Francis Cooke of Kingfthorp in
the County of Northamptonshire
She died April ye 23rd 1718
in the 81st year of her age

Defervedly eminent for Piety & Devotion
for Charity and Conjugal Affection
and for all over Chriftian Virtues
which made her a good Pattern to all that knew Her
in every Relation​
The abbreviation "kt" on the above inscription is short for Knight.

The reference to "cutting of the stone" is not as might be imagined a reference to stone masonry, but rather to gall, bladder and kidney stones. The "convenient apartment" that Prichard had financed and had built at St. Bartholomew's Hospital in London was a "cutting ward", so an early idea of an operating theatre at which procedures to remove stones (known also as  Lithotomy) were carried out. A plan of the building survives and can be viewed here.

As described in a book published 1907 by the Merchant Taylors Company (of whom Prichard was a member), "The monument is surmounted by a shield of arms: Ermine, a lion rampant sable, within a bordure sable; impaling, per pale gules and azure, three eagles displayed or. Crest: a horse's head and neck couped."

​Also commemorated on the same monument is the son of William Prichard, also called William, who had died at the age of 16. 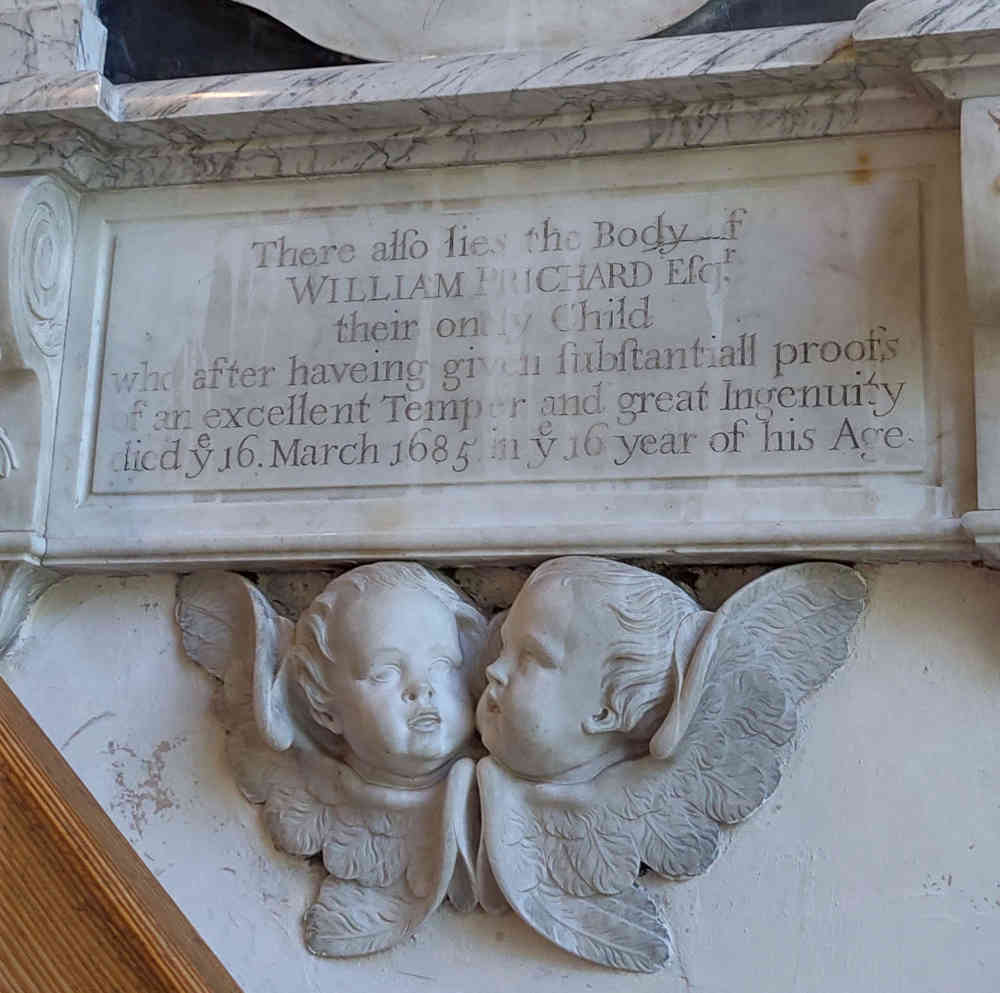 This website contains a biography of Sir William Prichard and his family. 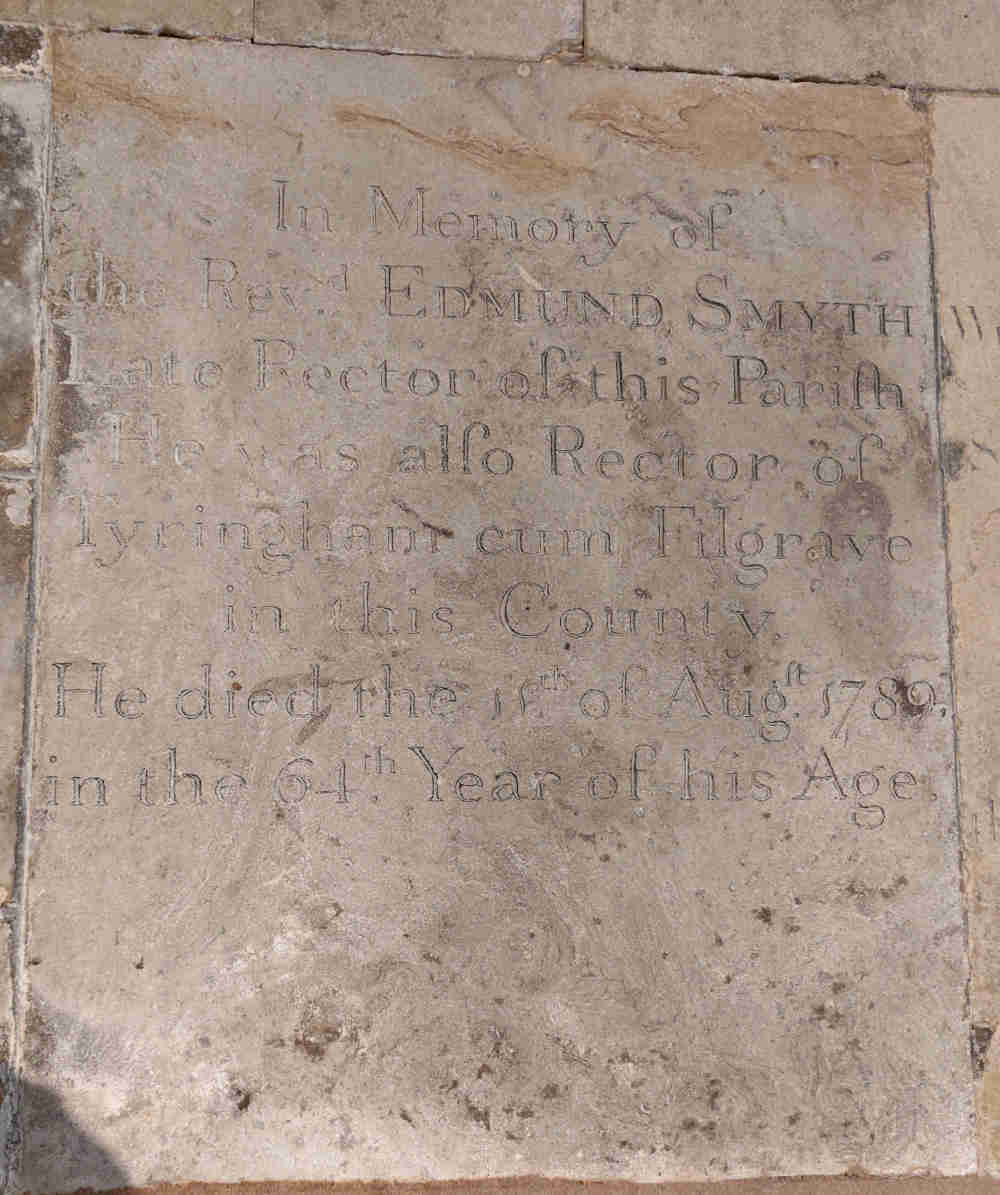 The inscription reads:
In Memory of
The Rev'd Edmund Smyth
Late Rector of this Parish
He was also Rector of
Tyringham and Filgrave
in this County
He died the 16th of Aug'st 1789
in the 64th year of his Age
His wife Dorothea is also commemorated inside the church. Dorothea was the sister of Lawson Shan, rector of Great Linford between 1762-1770. 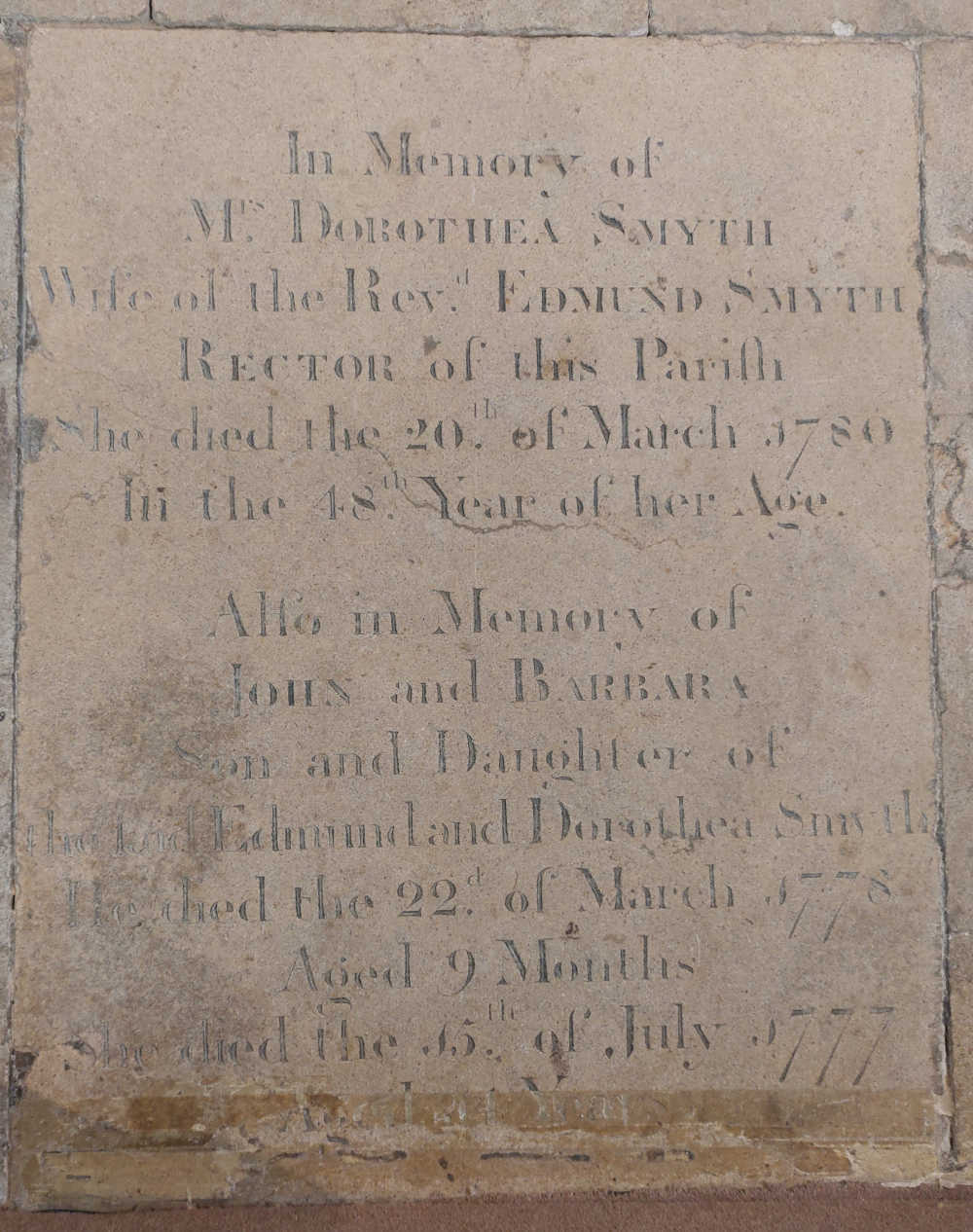 The inscription reads:
In Memory of
Mrs DOROTHEA SMYTH
Wife of the Rev'd EDMUND SMYTHE
RECTOR of this Parish
She died the 20th of March 1780
In the 48th Year of her Age

Also in memory of JOHN and BARBARA
Son and Daughter of
the said Edmund and Dorothea Smyth
He died the 22nd of March 1778
Aged 9 Months
She died the 15th of July 1777
Aged ?4 Years

Simply stating B S 1777, this is likely to be the Barbara Smyth referenced above. 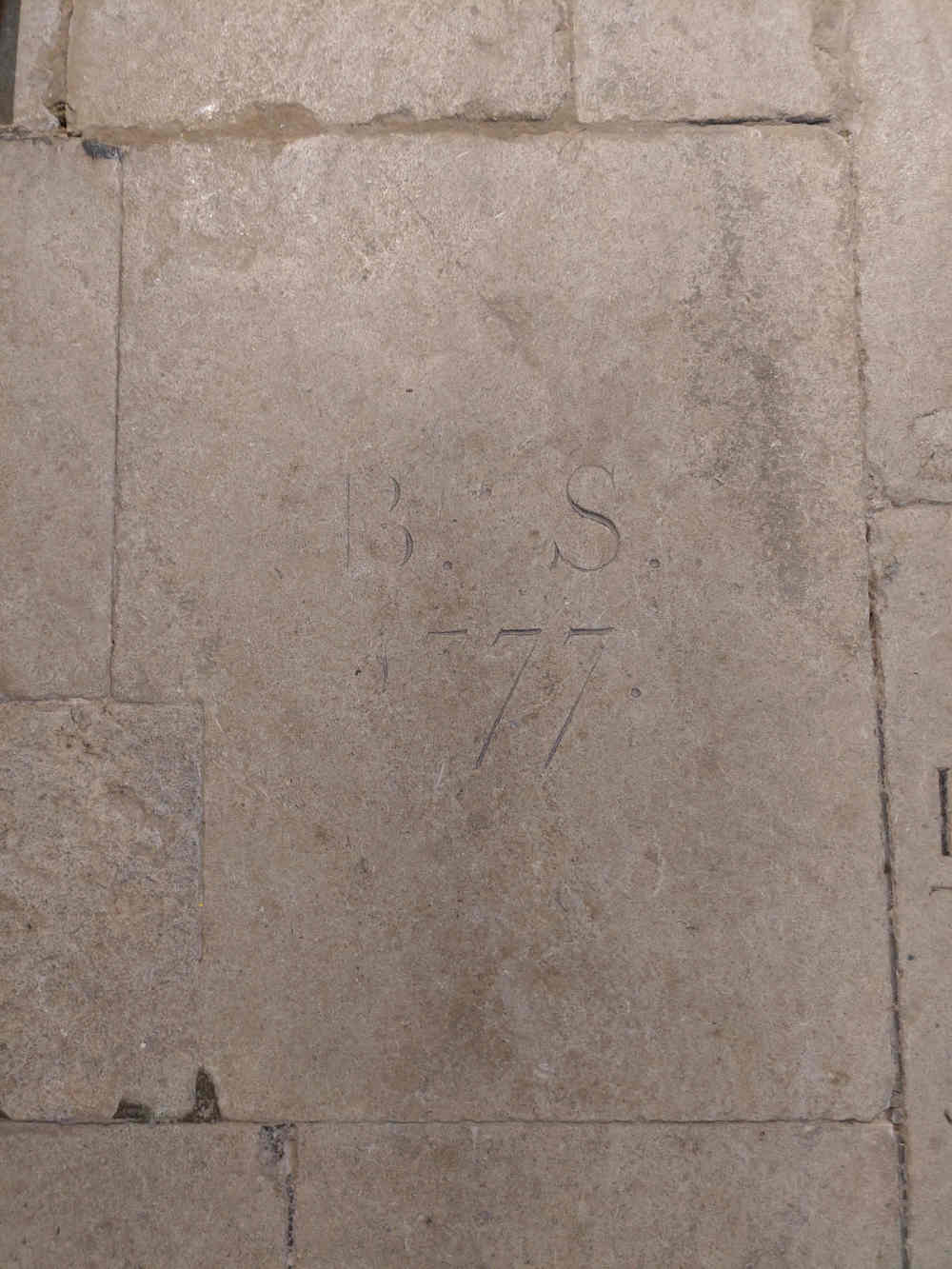 William Smyth was the son of the aforementioned Edward Smyth and became Rector of Great Linford in 1786. The memorial in St. Andrews commemorates William's wife Susanna and several other family members. 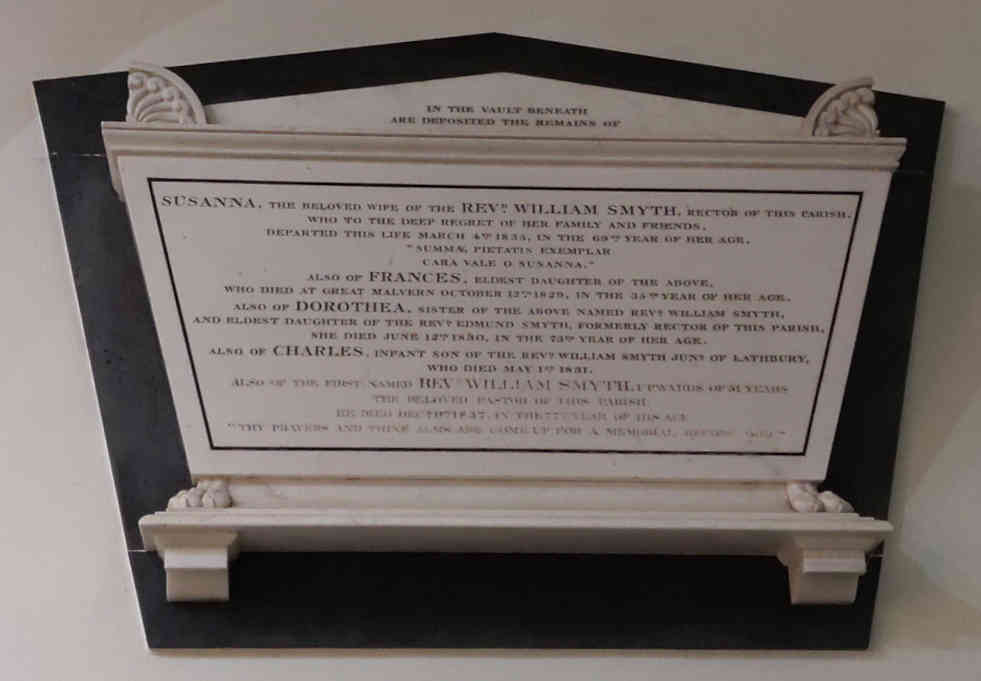 The Uthwatts were the Lords of Great Linford Manor for over 200 years, so it is not surprising to find them memorialised within the walls of St. Andrews Church.  The "Reredos" referenced in the plaque below is an ornamental screen covering the wall at the back of an altar. 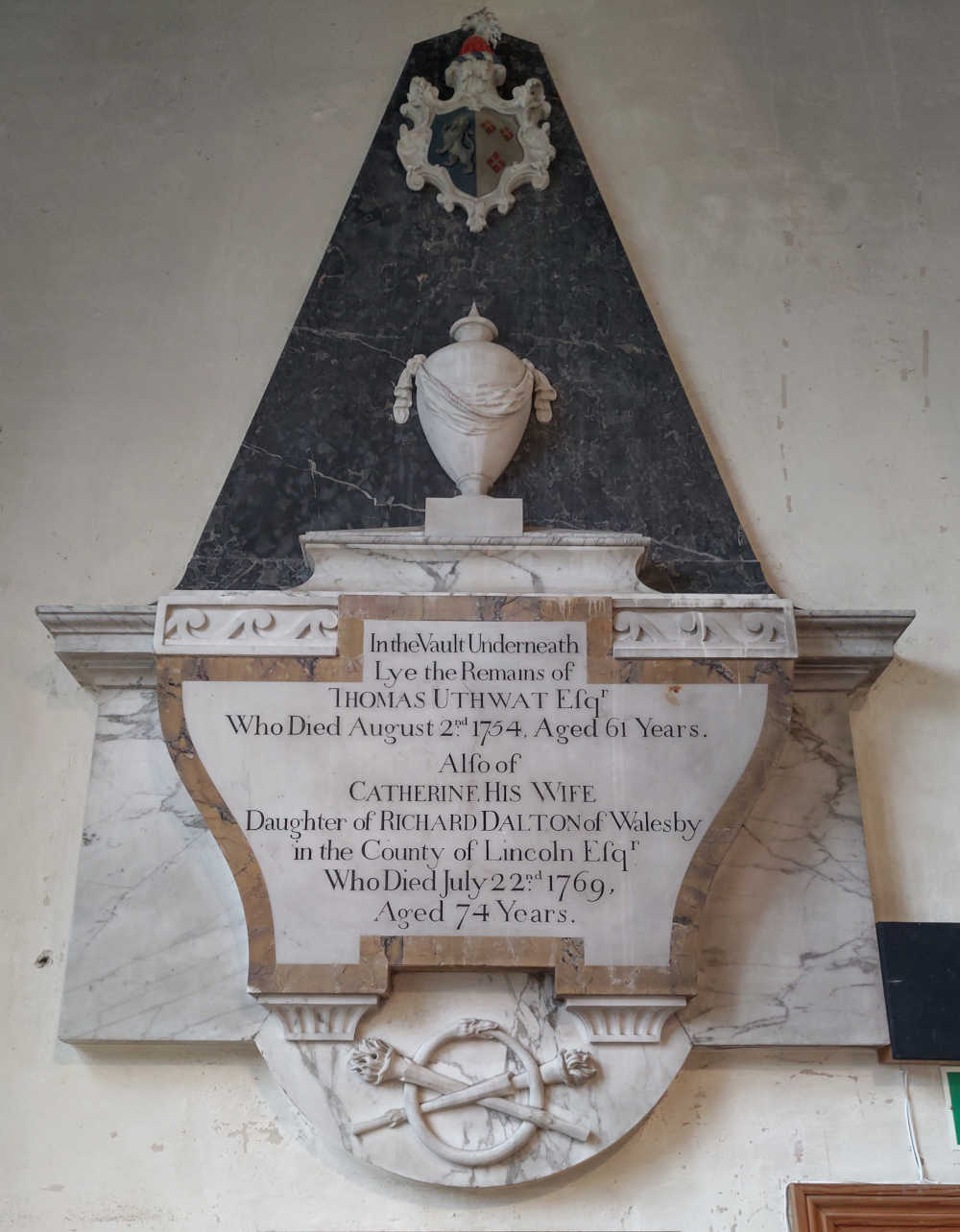 Inscription reads:
In the Vault Underneath
Lye the Remains of
THOMAS UTHWATT ESqr
Who Died August 2nd 1754, Aged 61 Years
Also of
CATHERINE HIS WIFE
Daughter of RICHARD DALTON of Walesby
in the County of Lincoln ESqr
Who Died July 22nd 1769
Aged 74 Years
For a biography of Thomas Uthwatt, click here. 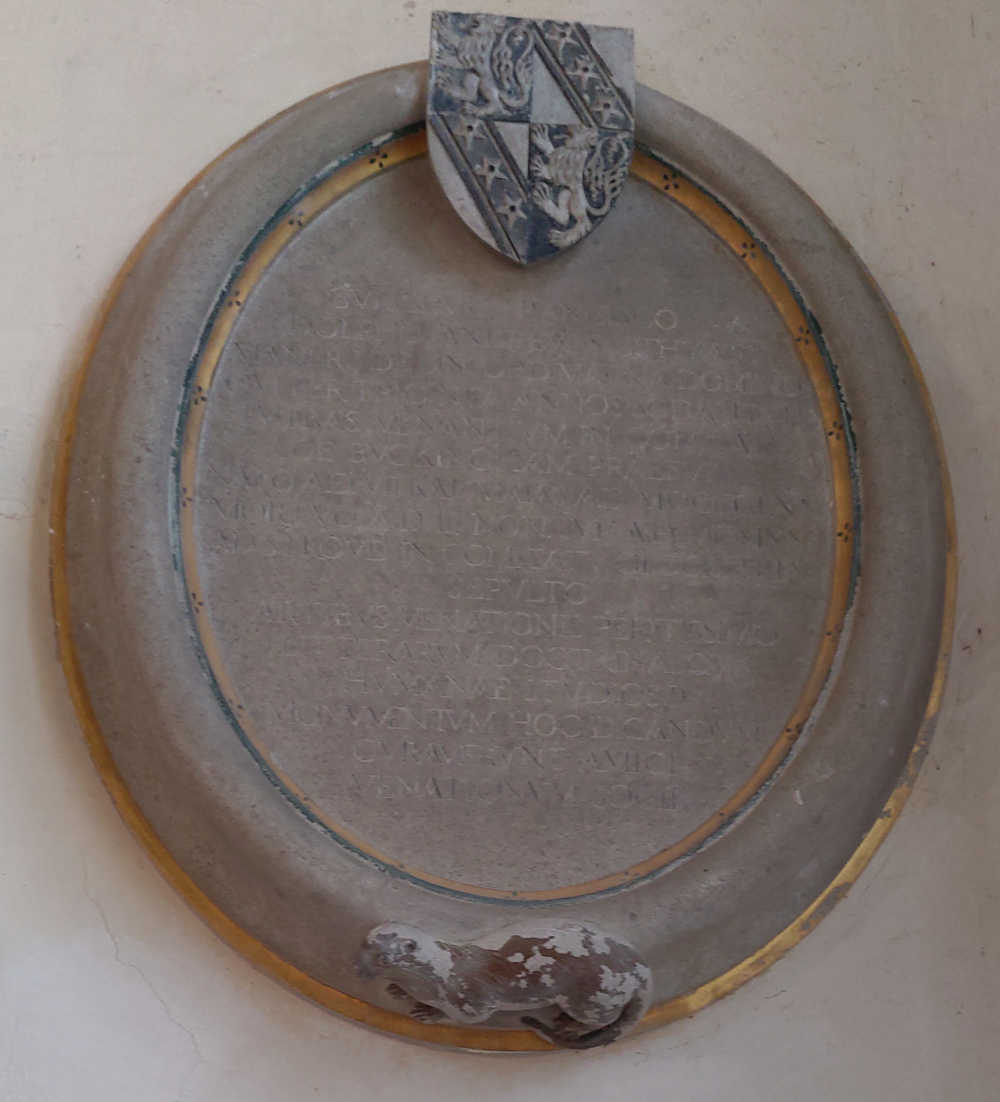 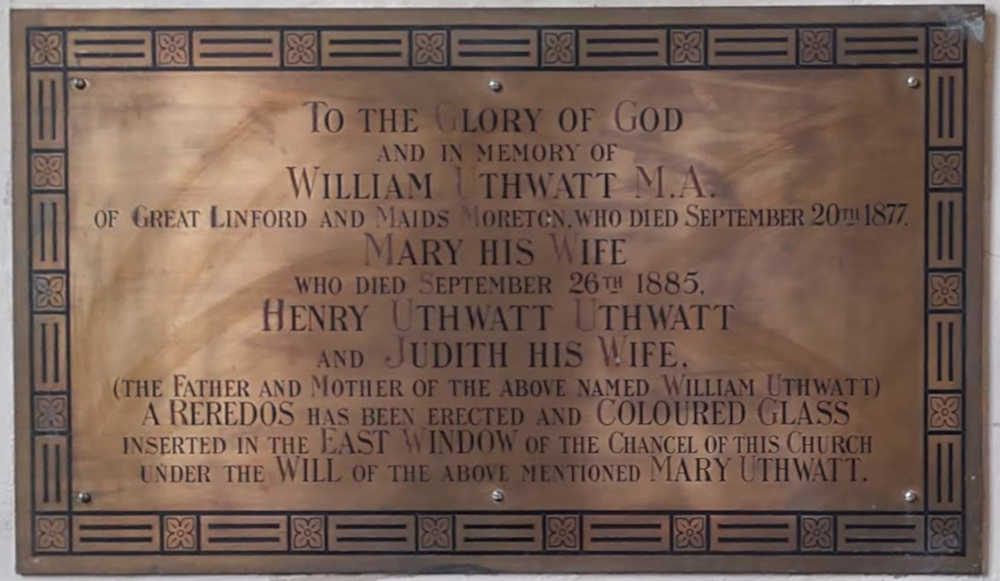 Inscription reads:
TO THE GLORY OF GOD
AND IN MEMORY OF
WILLIAM UTHWATT M.A
OF GREAT LINFORD AND MAIDS MORETON, WHO DIED SEPTEMBER 20TH 1877.
MARY HIS WIFE
WHO DIED SEPTEMBER 26TH 1885.
HENRY UTHWATT UTHWATT
AND JUDITH HIS WIFE.
(THE FATHER AND MOTHER OF THE ABOVE NAMED WILLIAM UTHWATT)
A REREDOS HAS BEEN ERECTED AND COLOURED GLASS
INSERTED IN THE EAST WINDOW OF THE CHANCEL OF THIS CHURCH
​UNDER THE WILL OF THE ABOVE MENTIONED MARY UTHWATT
For a biography of the Reverend William Andrewes Uthwatt, click here.

Who John and Anne Uvedall are and how they came to be commemorated at Great Linford is unclear.  No other reference has so far come to light concerning a family of this name in the parish. A book published in 1844 by the Lincolnshire society for the encouragement of ecclesiastical architecture, ascribes their dress as that of the "civilian and merchant" class. The smaller figures below John and Anne represent 5 sons and 3 daughters. Anne passed away at the age of 62, so would have been born circa 1549. 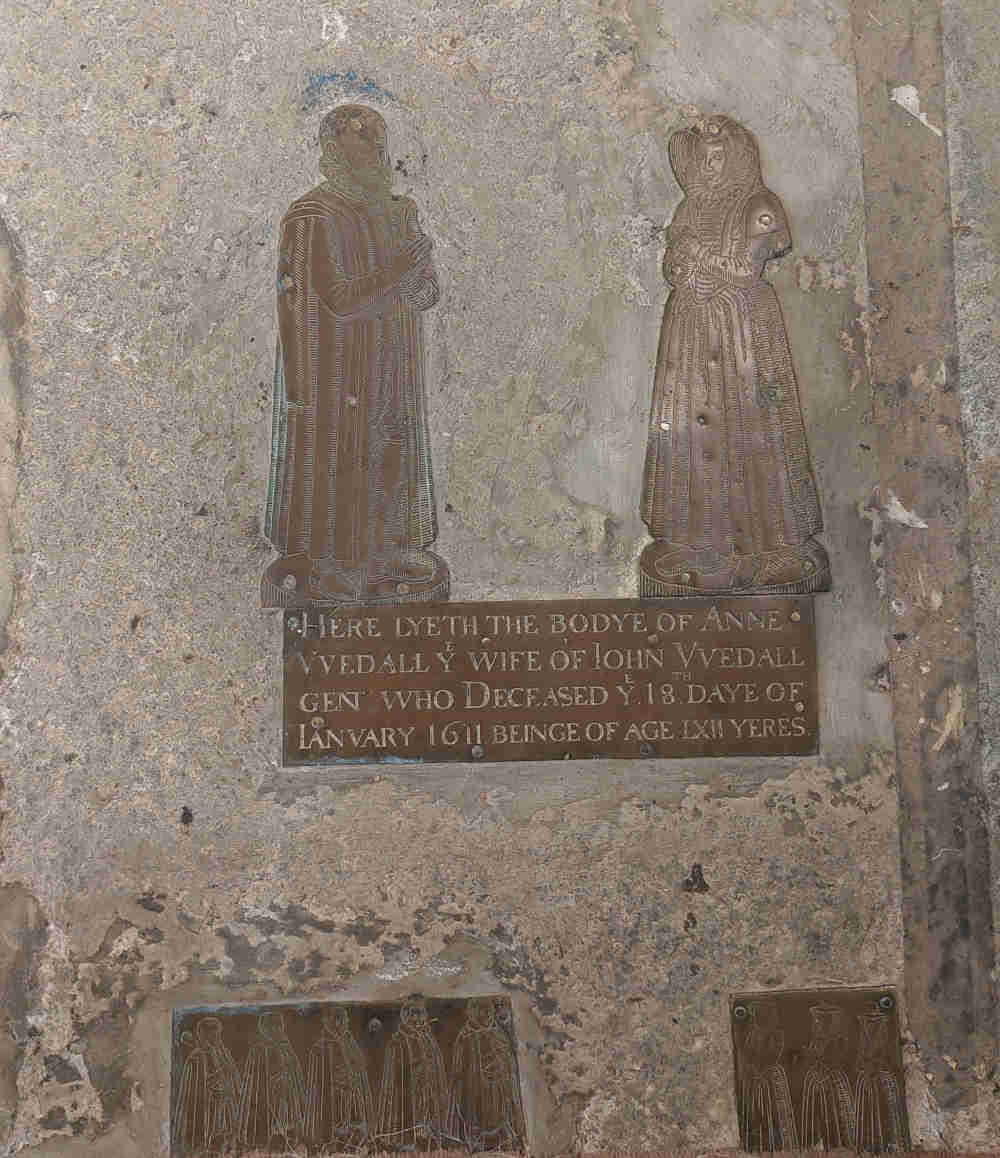