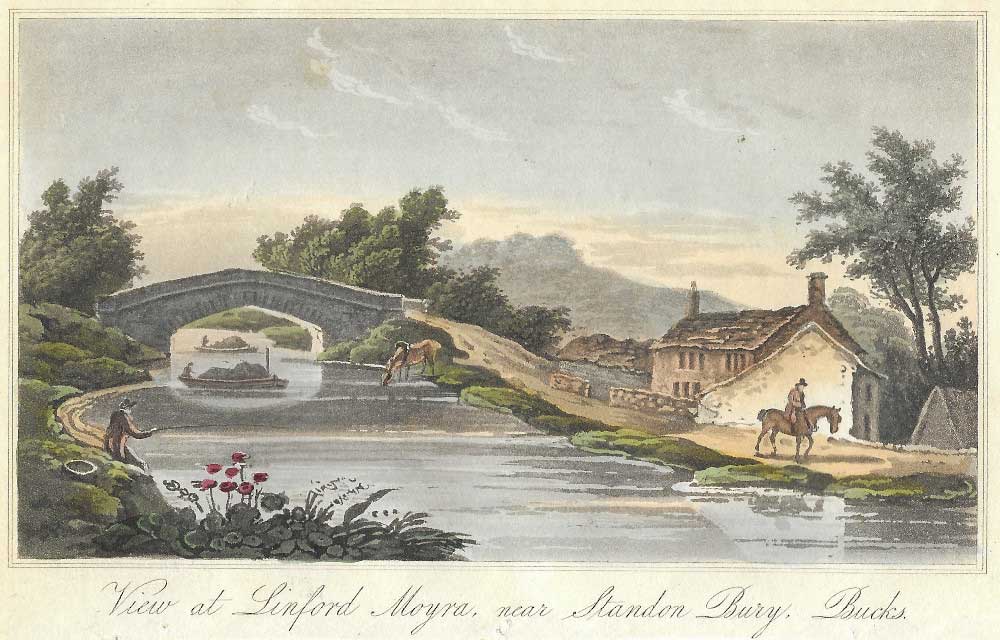 The illustrator John Hassell passed through Great Linford in 1819 and produced this watercolour for his book, a Tour of the Grand Junction Canal.

​The arrival of the Grand Junction Canal was the have a lasting impact on the landscape of Great Linford and the lives of its inhabitants as it carved its way through the parish; a positive one for many as it brought increased trade and prosperity, but for one prominent dissenter from the village’s elite, it was to prove a deeply unwelcome intrusion to be resisted with all his might.

The impetus to build the canal arose in the late 1700s during a period of so called “canal mania”, with numerous companies springing up to offer the chance to invest in newly proposed routes. The highly ambitious Grand Junction Canal was envisaged as a faster more direct route between London and Birmingham. At the time, the only navigable option on water was to go via the Thames to Oxford, and hence to Birmingham by the Oxford Canal, which had opened in 1780.

The proposal for the canal was formally debated and agreed at a meeting in Stony Stratford on July 20th 1792. The meeting was intended to be held at the Bull Inn, but according to newspaper reports, such was the intense interest, that the large throng of attendees were obliged to relocate to the larger space of the parish church. Notable amongst the attendees was the principle backer, the Marquis of Buckingham and the engineer James Barnes, a somewhat opaque figure in engineering circles, whose background as a brewer makes him an odd choice for the project, yet despite the lack of any evidence of formal qualifications, he appears to have had a touch of genius for the maths and detail required.

The Marquis put up much of the initial £350,000 cost, with a committee formed to oversee the construction of the route that the Marquis had paid Barnes to survey, though for his efforts, Barnes would only be appointed resident engineer; it was a colleague named William Jessop who was appointed principal engineer. However, Jessop seems subsequently to have stepped back from the day to day work of overseeing construction, with Barnes rescuing the project from disaster when the Blisworth Hill tunnel ran into serious difficulties. He seems to have been a hands-on engineer, so one can make a reasonable guess that he was on site at Great Linford during the construction and would surely have passed through on his initial survey.

An act of Parliament

Building a canal, and especially one with the geographical challenges of the Grand Junction was no easy feat, not only from the technical standpoint, but also from the need to buy up land by compulsory purchase and negotiate the legal difficulties and resistance to be encountered. An Act of Parliament was required, and the intent to petition for one was duly announced in the Saturday September 15th, 1792 edition of The London Gazette, an official journal of record in which statutory notices are, to this very day, required to be placed. The aforementioned “canal mania” is abundantly evident in this issue, with numerous notices published for new canals, including the Grand Junction. The notice makes specific mention of all the towns and villages upon which the canal would impinge, including Great Linford.

Parliament concluded a third reading of the act at the end of March 1793 and approval was forthcoming from The Lords the following month, with Royal Assent quickly received on April 30th 1793.

Construction of the canal began almost immediately after the act of parliament was passed, and by the end of 1784, upwards of 3000 men were in the employ of the company. The canal was built not as you might imagine in a strictly linear fashion, with a beginning and an end, but rather in sections where it was possible to speedily and profitably complete them, hence a 12-mile section between Brentford to Uxbridge was already open by November of 1794. On Wednesday May 28th, 1800 a section of canal was opened between Tring and Fenny Stratford, but it was not until the middle of 1800 that work got under way on the section between Fenny Stratford and Blisworth, though with troubles with the Blisworth tunnel and a lack of water, it was decided to concentrate resources on that portion between Fenny Stratford and Wolverton, the section to include Great Linford.

Work was scheduled to be complete by the end of 1800, hence we can say that in this year Great Linford parish would have seen a great upheaval as the canal workers arrived and the excavation of the canal bed and raising of the embankments began in earnest. Certainly, the canal appears complete through Great Linford by 1801. A notice in the Northampton Mercury newspaper of Saturday August 15th announces the auction of 300 hundred tons of “prime hay”, to be held on the banks of the Grand Junction Canal in the parish of Great Linford. The presumption is that the buyer would be using the canal to transport the hay. By 1802 a boat owned by a Mr. Henry Weeks had established a weekly service for, “passengers, parcels and luggage, between London, Stony Stratford, and Buckingham, and all the other intermediate places”, which according to his advert of Saturday June 19th was to include amongst its stops, Great Linford. A Wharf was also clearly established quite quickly at Great Linford, as the Northampton Mercury of Saturday April 2nd 1803 carried an advertisement for the sale of two “well built boats, now in the basin at Great Linford”, with the sale to be conducted at The Wharf Inn.

You will recall that not everyone in Great Linford welcomed the coming of the canal. The route was to pass directly through the gardens of Great Linford Manor Park, then in the occupation of the widowed Frances Uthwatt. Frances was occupying the estate in trust of her late husband Henry, with the inheritance set to pass on her death to a distant cousin, the Reverend Henry Uthwatt Andrewes. The elderly Frances had it seemed rather meekly signed the compulsory purchase order that the Act of Parliament had empowered, despite the objections of the estate’s trustee Sir Roger Newdigate. He had actually refused to sign, which perhaps explains the pleading tone of a letter Frances penned to Henry on August 2nd 1799.

The commissioners inform me that they shall pay for the ground that they purchase in this parish for the canal the same price they do for all the other ground... Indeed they must do as the act of Parliament directs them. I imagine it will be some time before the work begins here... It will not go within many yards of the garden...

I believe neither you nor myself have anything to do with the money, for as the estate is left in trust, the money must be invested in the hands of trustees, and at my death be answerable to the estate for it...

I beg you will believe me, Dear Sir...

Henry was having none of it. The canal was an eyesore and the compensation (fixed by the act) was derisory. Frances tried to placate him, writing to inform him that the company would enlarge the middle pond to compensate for the loss of the one cleaved by the canal’s route and, “make it a handsome piece of water at their own expense.”

Henry continued to fume, complained to Sir Newdigate and generally agitated against the canal, writing on April 26th, 1800, “The navigation goes through one of the ponds situated in that part which is both an avenue pleasure ground and yard, which they have no right to do by the act… Would any gentleman like to have such a nuisance near his garden or in view of it?”

The battle of wills rumbled on, with the canal company increasing their offer for the land to £50 an acre, which was furiously refused. Henry demanded that the canal be made a handsome piece of water where it passed the manor and that no tow path should intrude on his side of canal; in the latter he was at least victorious, but the canal was coming, and there was simply no stopping it.

But it seems fair to speculate that no matter how bucolic and sympathetic the canal was made where it passed through the manor grounds, the tranquil nature of the pleasure gardens were forever ruined for Henry. These were not pleasure cruises passing by his home, but a constant and doubtless intrusive flow of dirty barges crewed by men who arguably had little interest in passing by quietly. In a strictly class-based society, it must have been infuriating to Henry that the lower orders had suddenly and uncomfortably been offered a birds-eye view of his manor. This you cannot help but suspect must have been particularly galling, but unfortunately for the Uthwatts it would not be the final such humiliation, as they were later to lose even more land to the intrusion of  another disruptive transport innovation, the Newport Pagnell Railway.

Impact on other lives

​The canal would have transformed Great Linford from a relatively sleepy backwater village to a much more industrious place, as well as greatly changing the local demographics. New people would be passing through constantly; some would doubtless stay for varied reasons, and others locally born and bred would use the canal to set out on their own travels, perhaps never to return. And just as today we see new technologies upsetting the old, so the canal would have disrupted established trades. Sir Frank Markham, writing in his, “A History of Milton Keynes and District, Volume 1”, talks of a “stunning blow” to the hand-made lace industry, which was certainly a feature of life in Great Linford, once even including a lace making school. But lace made in the industrial heartlands of Lancashire and Nottingham could now be transported quickly and cheaply by canal, hopelessly undercutting the cost and volume of local cottage industries.

Markham also highlights population increases and associated housing pressures caused by the canal, singling out Fenny Stratford as suffering particular problems, though one can surmise that Great Linford suffered its fair share of similar problems, with the population jumping from 313 in 1801 to 376 by 1811, a significant increase for such a small village to absorb, and a trend that would continue, with the population hitting 557 by 1861, before declining in subsequent years.