​
​Henry Andrewes Uthwatt was the son of Henry Uthwatt Uthwatt (formerly Andrewes) and Judith Yates. He inherited Great Linford Manor on the passing of his father in 1812. At this time the Uthwatts had other estates in Oxforshire and Hertfordshire, and certainly it seemed that immediately upon the passing of his father, Henry was not particularly keen to live at Great Linford. A newspaper advert of September 25th, 1813, announced that the manor was available to let, for a period of 7 years.

One must presume that Henry had a taker, as on November 14th the following year, the following notice of a two-day sale appeared in the Northampton Mercury. It gives an extraordinary insight into the scale of operations at the manor and the life led by the inhabitants, thought the inclusion in the list of items to be sold of two “men traps” provides for an alarming understanding into the methods deployed by Henry to protect his estate from unwanted visitors.

To be SOLD AUCTION, By JOHN DAY & SON

On the Premises, at the MANSION-HOUSE, GREAT-LINFORD, near Newport-Pagnell, Bucks, the Property of H. A. UTHWATT, Esq. (who is leaving the same), on Monday the 21st of November 1814, and following Day;

The Sale to commence each Morning at Eleven o'Clock precisely.

Who was in the manor?

Regardless of whom was occupying the manor, the Lord of the Manor was still exercising his authority, a fact made abundantly clear by a stern notice published on December 17th, 1814, warning that the (unnamed) Lord of the Manor’s patience had worn thing at the rampant levels of poaching taking place, and that steps would be taken to clamp down, including prosecutions.

A clue as to the occupier of the manor house may come from a list of Game Certificates issued in September of 1815, which names the Reverend William Andrewes, a resident (though not Rector) of Great Linford as a recipient.  The Reverend was Henry's brother, born 1793.  Of perhaps greater significance, we find William Andrewes listed on the Poll Book for Great Linford in 1831, but no sign of Henry. This then seems good, if somewhat circumstantial evidence that William was occupying the manor and overseeing his brother’s interests in the estate.

Marriage and life at Great Linford

Though at least one source suggests he was a lifelong bachelor, the evidence is that Henry did marry, to a Jane Elizabeth Frances Bellchambers on February 18th, 1814 at the Church of St. George in Bloomsbury London. Her father appears to have been Benjamin Bellchambers, a coffee house owner and wine merchant. Perhaps the newly married couple lived in London for a time.

In 1830 Henry is listed as a subscriber for the sum of £2 2 Shillings per annum toward a hospital fund for the poor, and the following year he was elected to serve for one year as Sheriff of Buckinghamshire, but he otherwise seems to have let a quiet and unremarkable life, making few ripples in the newspapers of the time except for the occasional notice of houses in his ownership being made available for rent and the appointment of game-keepers. He also continued to a lesser degree the family habit of subscribing toward the publication of books.

If Henry had vacated the manor early in his Lordship, then we have ample documentary evidence placing him back at Great Linford from the late 1830s onward, starting with an 1837 Poll Book (by 1838 his brother William had moved to Stowe) and followed by the 1841 census, where we find both Henry and his wife Jane listed. He is described not unsurprisingly as being of Independent Means, though it is surprising that there are only 2 servants listed. Conceivably there would have been other staff in a variety of capacities living elsewhere within the village, but with only 2 live-in servants, it suggests that the lifestyle of the Uthwatts was perhaps not as grand as once it had been for the family. We also find Henry and his wife on the 1851 census, which gives us a place of residence, Linford Place, the name by which the manor house was known for a period of time. Again, there are only 2 servants.

Death and a sale

Following his death on December 29th, 1855 , a sale was announced by his executors that provides an extraordinary insight into the contents of the manor and the lifestyle enjoyed by its residents.

TO BE SOLD BY AUCTION

On the premises on Monday and Tuesday 17th and 18th days of March 1856, punctually at Eleven o’clock each day, by direction of the Executors of the late H. A. Uthwatt, Esq., deceased.

The whole of which will be set forth in catalogues, to be had at the Swan Hotel, Newport Pagnell, the Cock Hotel, Stony Stratford, the Radcliffe Arms, Wolverton Station; and of the Auctioneer, Buckingham; and New Inn, Stowe.

May be viewed on Friday and Saturday, the 14th and 15th of March, between the hours of Eleven and Five o’clock.

The painting mentioned is likely by the Flemish painter Hendrik Frans de Cort (1742-1810) but unfortunately whilst he is well known in the art world, the picture in question seems not to be on public display. However many of his other works can be found online, such as the one illustrated below. 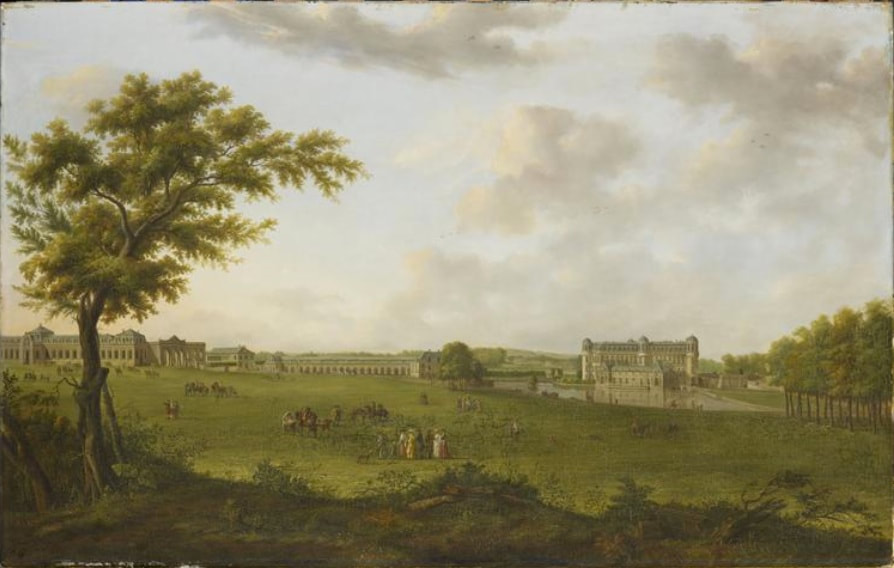 Chantilly in 1781, View from the Lawn. Hendrik-Frans De Cort, Public domain, via Wikimedia Commons
When he died, Henry was aged 68. He was buried at Great Linford on January 4th, 1856. His wife Jane had predeceased him on December 17th, 1855. The couple being childless, the estate now passed to Henry’s brother, The Reverend William Andrewes Uthwatt, whom we had previously speculated might have been acting as the de facto Lord of the Manor.